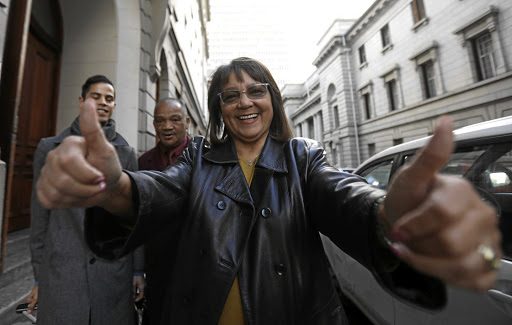 The new cabinet was a mix of faces and a few surprises.

President Cyril Ramaphosa lived up to his promise to appoint a forward-thinking executive by blending the young and the old in his appointment of ministers and their deputies.

Lamola's appointment did not come as a surprise as he had been tipped to be among a group of young leaders who would make it to cabinet.

Another new comer is former KwaZulu-Natal premier Senzo Mchunu. Mchunu is the new minister of public service and administration. Mchunu had supported Ramaphosa in the lead up to the Nasrec elective conference in 2017.

Former Gauteng MEC for finance Barbara Creecy also made it to cabinet as minister of environment, forestry and fisheries.

The new cabinet has received a vote of no confidence even before it even starts performing its duties.
News
2 years ago

The president said the new cabinet made history.

"For the first time in the history of our country, half of all ministers are women. We have also included a significant number of young people," Ramaphosa said.

The ANC's former chief whip Jackson Mthembu has been appointed minister in the Presidency. This is his debut into cabinet after having been the party's spin doctor and a former MEC for transport in Mpumalanga.

Fikile Mbalula has been reappointed into cabinet after being reshuffled by Ramaphosa in February last year. He is now minister of transport, deputised by Dikeledi Magadzi.

The biggest surprise entrant into cabinet is The Good party leader Patricia de Lille who had a fallout with the DA and quit as Cape Town mayor in acrimonious circumstances.

There were also a number of fresh faces announced as deputy ministers. These included former Cosatu president Sdumo Dlamini, who will deputise Didiza along with former deputy minister of rural development Mcebisi Skwatsha.

David Masondo, a former MEC for treasury in Limpopo, was also appointed as deputy minister finance. The ANC's former spin doctor and current head of the presidency at the party's headquarters for Ramaphosa, Zizi Kodwa has been appointed deputy minister of state security.

EFF: Cabinet an insult to the intelligence of South Africans

The EFF has described the new national executive announced by President Cyril Ramaphosa as an "insult to the intelligence of South Africans".
News
2 years ago

President Cyril Ramaphosa’s cabinet is a mixed bag of new faces, old faces in new jobs and ministers who have remained in their positions.
News
2 years ago
Next Article