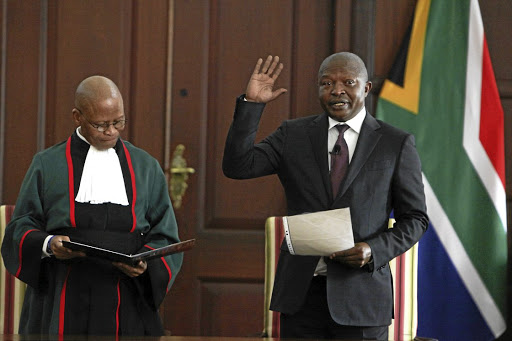 David Mabuza is sworn in as a member of parliament by Chief Justice Mogoeng Mogoeng at the presidential guesthouse in Pretoria yesterday. He is now legible to be appointed in any position after appearing before the ANC integrity commission. /Alaister Russell

President Cyril Ramaphosa will today inform those he is appointing to his executive one by one, ending days of speculation of who will make the cut to his cabinet.

Sources around the presidency confirmed that Ramaphosa is planning to call those who have made it into his reduced executive today to give them the news of which parliamentary portfolio they will serve in.

He will thereafter announce his executive as well as details of a reconfigured and reduced ministries.

Ramaphosa gave some indication yesterday that his deputy could be David Mabuza.

"Siphelele manje," he said to Mabuza in an embrace, which loosely translates to "we are now complete".

"We are done... thank you," Mabuza responded.

The pair hugged after Mabuza was finally sworn in as a member of parliament at the presidential guesthouse in Pretoria.

Mabuza's swearing-in as an MP came six days after he postponed taking his oath citing wanting to clear his name first before the ANC's integrity commission, where he appeared on Friday.

The integrity commission, led by chairperson George Mashamba, spent the day deliberating on the responses of those implicated in wrongdoing before handing over their final report to the ANC.

But, regardless of what the integrity commission finds, Sowetan understands that the ANC's top six decided that the report would be insignificant.

The ANC top six were locked in talks on Monday, finalising who will be best fit in which position.

It was a balancing act for Ramaphosa as he had to accommodate his political allies and detractors.

He also had to balance a commitment he made of gender parity in his cabinet.

While Ramaphosa was carefully mulling the matter, there were mounting calls for him not to appoint Pravin Gordhan as a minister.

This came after Gordhan was implicated in wrongdoing by public protector Busisiwe Mkhwebane in a report she issued on Friday.

But Gordhan has asked the high court to overturn Mkhwebane's report that recommended disciplinary action be taken against him for "violating the constitution" by approving former SA Revenue Service deputy head Ivan Pillay's early retirement.

"The report is also riddled with reviewable errors. It misstates the applicable legal framework for the approval of Mr Pillay's early retirement with full benefits. It also is the product of a procedurally unfair and flawed process," Gordhan argued.

But despite Mkhwebane's report, there has been mounting calls within the ANC and among the opposition for Ramaphosa not to appoint him.

ANC member Phapano Phasha took the fight further, writing to the ANC's integrity commission and asking them to instruct Gordhan to step aside from any public office.

It's been widely speculated that Gordhan is set to return as public enterprises minister.

Cosatu and the SA Communist Party on the other hand have called on Ramaphosa to ignore Mkhwebane's findings against Gordhan.

Insiders close to Ramaphosa said he was the first ANC president to have consulted as widely as he did on who to appoint to the executive.