My son was not a thief - grieving mom 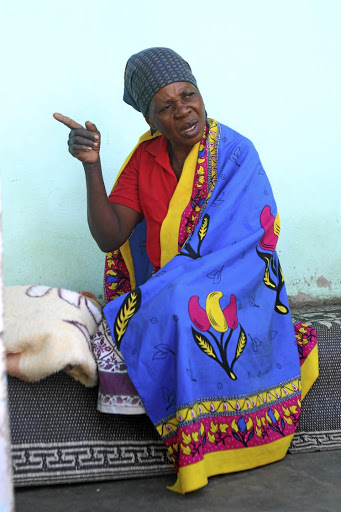 Gladys Mantlhaka, 54, mother of one of the three men who were killed at GaWally village. / ANTONIO MUCHAVE

The family of one of the three men killed by a mob after being accused of house robberies believe he was mistaken for a thief.

The trio, who died on the scene, were assaulted with stones, bricks and sticks.

Maomakwe's mother Gladys Mantlhakga said her son was not a thief and would never steal from anybody.

"He had never stolen a single cent from me and he has been an obeying son. I want those who killed him to bury him. I'm told he was not even given an opportunity to explain why he was at GaWally at the time," she said.

Mantlhakga said Tshepo left in the morning for work in Block 5 village.

"He later went out to the local tavern with his friends. Then later a man came, asked him and his friends to accompany him to GaWally, where there was some DJs performing.

"Apparently the man left them at the tavern and said he was going to check up on his girlfriend. He suddenly came back being dragged by a group of people accusing him of theft and he pointed at my son and his two friends, saying they were his accomplices."

She said she was informed by a relative that her son was killed.

"I went to his room and he was not there. I looked everywhere but I was afraid to go to the scene. I heard people saying he was badly stoned and he kept on telling them that he didn't do it," Mantlhakga said.

Man killed due to mistaken identity
News
2 years ago

She said she would understand if they had found him in possession of stolen goods or in the act stealing.

When Sowetan visited the scene, there were bloodstains on the ground with stones, sticks and bricks scattered around.

According to a resident who wished to remain anonymous, several households have been left vacant following a spate of attacks in their homes at night.

GaWally village local chief Erick Modika condemned the killing but said the incident showed that residents were tired of spate of crimes in the area.

"House owners who have been living in the new area have left because they are attacked at night. I'm aware of three more cases where residents were attacked and robbed," Modika said.

"We have been reporting these cases to the police and asked them to patrol the area at night, but they told us they are short staffed and have few vehicles. Police once came to patrol the area, but we want them to do it the whole night because immediately after they leave criminals strike."

"The station started as a satellite and now is a fully fledged one which will be boosted with resources to patrol the villages," he said.

Mojapelo said police would "be merciless in dealing with any people who take the law into their own hands by attacking people they suspect of being criminals".