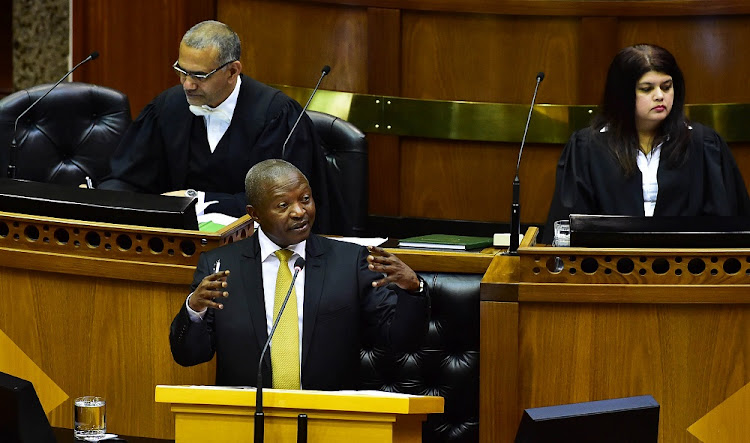 ANC deputy president David Mabuza is set to be sworn in as a member of parliament today.

Following his meeting with the ANC's integrity commission on Friday, Mabuza is confident he will be cleared and is ready to take up his seat in parliament, the governing party confirmed on Tuesday.

"Following last weekend's request by the deputy president to postpone his swearing-in so that he could have time to engage with the integrity commission and that has since been concluded," read a statement.

"The ANC commends the deputy president on the exemplary position he has taken and for putting the interests and integrity of the ANC first."

Last week Mabuza took many by surprise when he opted to postpone his swearing in in order "to clear" his name with the integrity commission.

At the weekend, the integrity commission was apparently unable to tell Mabuza why they had flagged his name and failed to provide proof of corruption levelled at him. Mabuza's name was among those of 22 others accused of having prejudiced the integrity of the ANC.

According to insiders, instead of the integrity commission telling Mabuza where it derived its finding against him, he was asked to tell the body why he was being accused of corruption.

According to his spokesperson Thami Ngwenya, the deputy president decided to ask to meet the commission as he had not been presented with the report which is said to have flagged him, and was not presented with an opportunity to respond to the allegations.

Following his decision to suspend his swearing in last week, Mabuza was replaced by Judy Hermans on the ANC's MP list - meaning there is no vacant seat. However, Nomvula Mokonyane's decision to resign from parliament has left a seat which Mabuza can now occupy.

Sowetan understands that other leaders including Bathabile Dlamini and David Mahlobo met with the integrity commission over the weekend. Like Mabuza, Mahlobo was asked by the commission why he was being accused of corruption.

Dlamini was accused of funding the Gupta TV, ANN7, which has since closed down.

The more leaders found themselves in trouble with the party or "the establishment" - the more popular they seemed to be in party ranks.
Opinion
2 years ago

Dlamini had apparently expected to be questioned about the Constitutional Court ruling that found that she was reckless and grossly negligent in the social grant debacle while she served as minister of social development.

Sowetan further understands that at the ANC officials' meeting yesterday, the commission's report was discussed and the Top Six is expected to set it aside.

However, the party's spokesperson Pule Mabe said that the ANC would be jumping the gun by setting the report aside as the commission was still busy meeting other leaders mentioned.

"There has been no meeting to reconsider the report of the integrity committee," said Mabe.

It has also emerged that Mabuza has been unhappy with ministers in the outgoing cabinet who showed "disrespect" towards him. "He told him [Cyril Ramaphosa] that he was head of the ANC deployment committee but there were ministers who made appointments without consulting the committee. In particular, he complained about appointments at state-owned enterprises," said a source.

"He said those ministers would tell him that they have spoken to the president."

Ramaphosa is expected to announce his cabinet before the end of the week.

The department of science & technology is likely to be combined with higher education while trade & industry may be joined with economic development. There seems to be an agreement that Ebrahim Patel will be the new head of trade & industry.

Although his name was not on ANC list, he could be brought in by Ramaphosa as one of the two ministers he can appoint to cabinet from outside the National Assembly.

The ANC's integrity commission refuses to reveal what party's deputy president David Mabuza is accused of, saying its report is the property of ...
News
3 years ago

ANC deputy president David Mabuza has done it again, leaving SA guessing about his next political move - while he consolidates his power.
News
3 years ago
Next Article