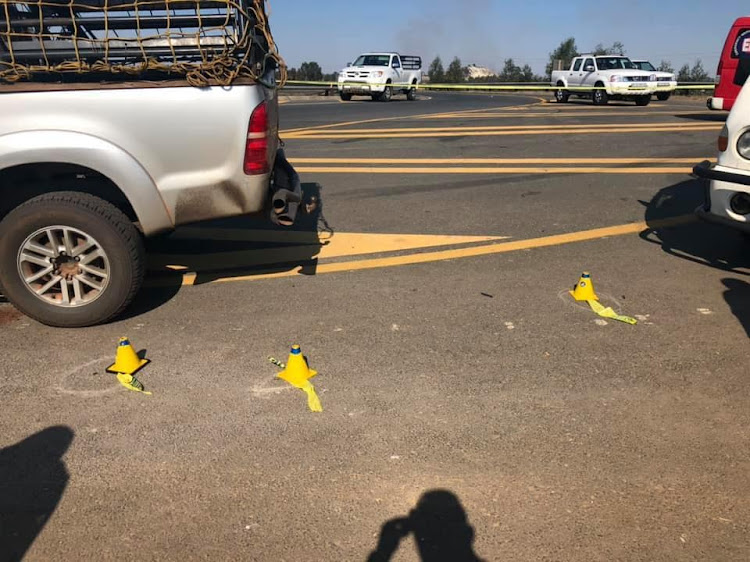 The scene of the crime where gunmen opened fire on two occupants of a bakkie broken down on the N12 bridge at the Putfontein Road off-ramp in Benoni on Sunday morning.
Image: Supplied

The heartbroken family of 23-year-old Jessica Kuhn are struggling to come to terms with her senseless murder in Benoni, east of Johannesburg, on Sunday.

Jessica and her friend were shot dead after their bakkie ran out of diesel, forcing them to stop on the N12 bridge near the Putfontein Road offramp around 11am.

Police spokesperson Lungelo Dlamini said the friends were  attacked by three men, who fatally shot them in cold blood before trying to set their bakkie alight.

The attackers are believed to have fled the scene with a cellphone stolen from the pair.

The suspects arrested for the murder of two Durban metro cops on Monday have been linked to a family massacre, in which four people were killed.
News
3 years ago

The victim's uncle, pastor Frikkie Kuhn, described Jessica as a beautiful young woman who will be deeply mourned by her family.

"She never allowed anything to stop her from achieving her goals. She had so many plans and wanted to do so many things," Kuhn said on Monday morning.

"Both her parents are loving and caring people."

"It doesn't make sense. As a pastor in the family, it is very difficult to understand why people would do something like this. What sane person walks past and just starts shooting?

"Was it really just for a cellphone? What did they want there? To gain what?"

Kuhn said the family will always remember the times they shared with Jessica. "She lived every day fully, as if there was nothing wrong in the world," he said.

ER24 spokesman Ross Campbell said paramedics arrived at the scene to find the woman inside the cab with a single gunshot wound. He said a 19-year-old man was found outside the vehicle with multiple gunshot wounds. Both were declared dead on the scene.

Dlamini said community members who were on the scene used a fire extinguisher to prevent the bakkie from catching fire.

No arrests have been made yet, but Dlamini said officers would work around the clock until the killers are brought to book.