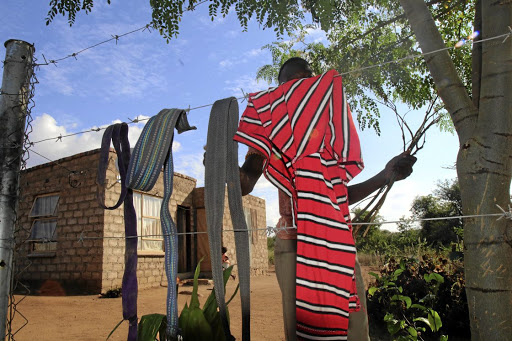 The belts, sticks and a top allegedly used to unleash brutality, which resulted in the death of an eight-year-old girl from Malungane section of Namakgale township. / ANTONIO MUCHAVE

Three children, one aged four, witnessed an eight-year-old girl being murdered allegedly by her mother after she was accused of stealing R20.

The girl's 13-year-old cousin has told of how the woman, 31, chased the child around in the house in Malungane section in Namakgale, Phalaborwa, in Limpopo, whipping her with an electric cable, suffocating her with a T-shirt and strangling her with belts on Thursday.

The woman has two other daughters - the four-year-old and a 13-year-old, among the three who witnessed the beating.

"Before assaulting the victim, the woman asked her where the R20, which she had left in the house and she said she did not know," said the boy.

"When her mother started unleashing her anger, the victim tried to escape through the window. She was unlucky as the woman managed to grab her and took out an electric cable and whipped her.

"She also used a T-shirt to suffocate the girl and used belts, including mine, to strangle the victim," he said.

Men not the only ones who abuse

That led to the belief that they, and no other, are the only ones capable of visiting such horrors on 'loved' ones.
Opinion
2 years ago

The boy said the girl's mother kept saying that she wanted the girl to go and tell the truth in heaven.

"At one point the girl, while bleeding through both her mouth and nose, went under the bed to escape the brutal assault but the woman trampled on her head," he said.

The woman apparently went out and fetched sticks and continued to beat the girl, he said.

The witness said the woman poured cold water on her daughter twice in between the beatings.

The beating, according to the boy, lasted for more than two hours with the girl screaming for help, which was not forthcoming.

"I feel bad that my cousin has died such a horrible death, especially at the hands of her own mother. But I could not say a thing because the woman was angry," he said, adding that he feared that he too would be punished.

The woman appeared in the Namakgale magistrate's court on a charge of murder on Friday. The case was postponed to this week for a formal bail application and further investigations. Provincial police spokesperson Col Moatshe Ngoepe confirmed that the deceased was found with multiple injuries throughout her body.

The boy added that his grandmother had previously sought the intervention of social workers because the woman has a habit of assaulting her children.

The grandmother had been attending a funeral in Bushbuckridge, Mpumalanga, when the girl was killed.

Kanakana Mantshimuli, spokesperson for the provincial department of social development, said they were not previously informed of the woman's alleged abusive behaviour.

"We are going to investigate to find out what was the reason for social workers not to inform us about the woman's abuse of her children," said Mantshimuli, adding that they would also help trace the children's father.

He said should none of the relatives express willingness to take care of the remaining children, the department would recommend that the children be taken to a place of safety.

When Sowetan arrived in the area on Friday, residents were unaware of what had happened in their neighbourhood.

Evans Mosodi, 33, said he used to see the woman's frustrated children on the streets by themselves at night and that when he asked them why they were in the streets at night, they would say they had been kicked out of their home by their mother.

"I could tell that something was not right in that family and that the woman was abusive towards her children.

"I could not do anything because I did not want to interfere in another family's matters," said Mosodi.

The mother's sister said the family was devastated by the incident.

She was not at home when the girl was killed.

"As the family, we feel sad and believe my younger sister should have informed us about the theft of the money instead of unleashing brutality on her own child," the woman said.

Provincial MEC for social development Nkakareng Rakgoale expressed shock and appealed to the community to help identify abusive parents so they can get them involved in family preservation and parental skills programmes offered by her department.

She said social workers would be sent to the family to provide counselling.