He said I was bewitched - 'Prophet' rapes mother of two 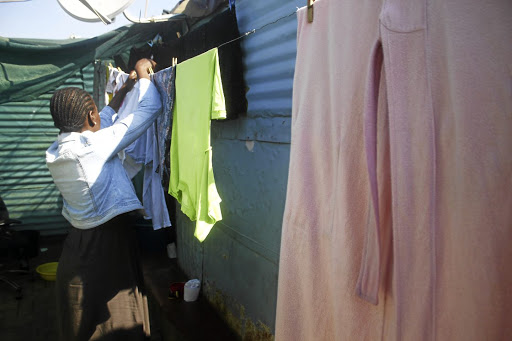 The 27-year-old woman from Vusimuzi section in Tembisa was 'raped' by a false prophet in her shack on Wednesday last week. She is one of several victims.
Image: KABELO MOKOENA

A 27-year-old woman was allegedly raped by a false prophet last week. Her attacker allegedly forced her to insert a R2 coin into her vagina to get body fluids he would mix with muti to reverse her curse.

The woman from Vusimuzi section in Tembisa on the East Rand became the latest victim of "fake prophets" targeting vulnerable community members who seek deliverance.

The woman said the man met her on the street on Wednesday and prophesied to her, saying her life was in danger. He said he would pray for her and suggested they go to her house.

She said the man told her that he needed to cut her pubic hair to perform the ritual.

The mother of two said: "He said I was bewitched. He said someone stole my black panty. He took the hair from my private parts, armpits and my head and mixed it with muti.

The woman said she became scared and believed some of the things he told her.

She said the man was dark, had small dreadlocks and spoke Sotho.

"He said he felt sorry for me and he wanted to help me. He asked for water that he mixed with muti. He burned a toilet paper with potassium permanganate and oil that produced a lot of smoke. He said he needed the same hair that was used to bewitch me so that he can reverse the curse," she said.

The woman said the man asked her to take off her clothes, wear a nightgown and sit on the bed. He then asked for a pair of scissors that he used to cut the hair. He asked her to insert a R2 coin in her vagina to extract body fluids.

"He said he would just play with my vagina so that I can produce some fluids. He then pushed his penis inside and had sex with me. I tried to push him off but he pressed me down hard," she said.

Another victim said the same thing happened to her on May 17 but her husband called and interrupted the ritual.

Police spokesperson Capt Nelda Sekgobela said a case of rape has been opened.

A Limpopo mother whose daughter was allegedly raped by a local pastor wants him to rot in jail.
News
3 years ago

Sekgobela said police in Tembisa were investigating several cases where people claimed they were robbed by fake prophets.

"The complainants normally complain that the prophets offered to pray for them. Some people are robbed in the streets while others are robbed at their homes," she said.

Johannesburg Central police are also investigating several cases in which people were robbed of money and cellphones by false prophets.

Johannesburg police spokesperson Capt Xoli Mbele said in the latest incident, the victim was robbed of his cellphone.

"The suspect told the victim that his cellphone had demonic power. He told him to leave it with him to pray for it and sent him to buy something in the shops. When he came back, the 'prophet' was gone with his cellphone."