Former president Jacob Zuma has snubbed the inauguration of his successor, Cyril Ramaphosa, which is currently under way in Pretoria.

Zuma was among the former presidents, which include Thabo Mbeki, FW De Klerk and Kgalema Motlanthe, who were due to grace the event.

The official programme for the day had Zuma scheduled to arrive just after Motlanthe but instead, Zuma sent his wife, Bongi Ngema-Zuma.

This comes a day after Zuma hinted that he may not make it to the event.  Addressing his supporters outside the High Court in Pietermaritzburg at his corruption trial, Zuma said people should not be surprised if they do not see him – because he might be busy.

[Look] The formal programme is about to commence at the #SAInauguration19 at Loftus Stadium in Pretoria. pic.twitter.com/MxPZbteHjw

“If you don’t see me in some things, you must know I am busy. Tomorrow, the president is being inaugurated and there will be dignitaries and presidents. As they are inaugurating him, I am in jail. I don’t have time to go there because I am busy here, trying to stay out of jail,” said Zuma, speaking in isiZulu.

It is unprecedented for a former president to snub the event. Zuma’s predecessor, Mbeki, despite their frosty relationship, attended both his inaugurations in 2009 and 2014.

It is unclear whether Zuma had communicated that he would not be available for the event. 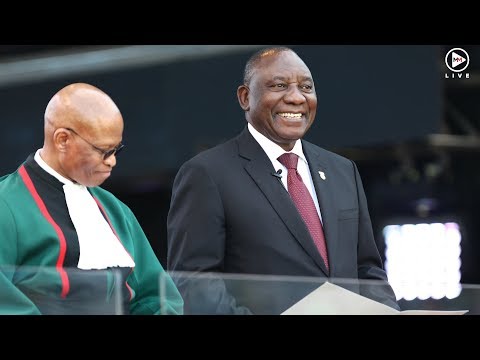