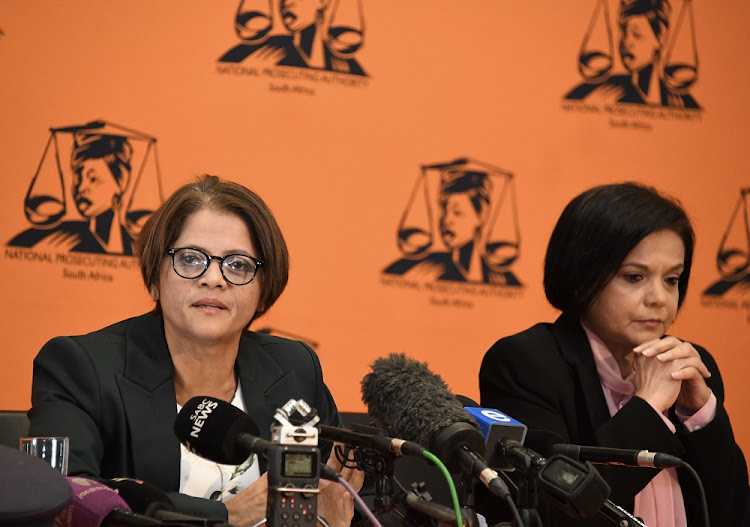 Head of the investigations directorate Hermione Cronje (left) and National Director of Public Prosecutions Shamila Batohi at the media briefing at the NPA head office in Silverton, Pretoria, on May 24 2019.
Image: Ntswe Mokoena, GCIS.

"If you go after the king, make sure you kill him."

This was the sentiment expressed by national director of public prosecutions advocate Shamila Batohi on the need to have watertight cases as she steers the prosecuting authority to take on complex corruption cases.

"We will be attacked from various quarters. We need to make sure we don’t rush with cases … that we have solid cases," she said.

Batohi was speaking to the media on Friday alongside the newly appointed head of the investigations directorate, advocate Hermione Cronje, national police commissioner Khela Sithole and the head of the Hawks, Godfrey Lebeya.

Batohi said on her arrival at the NPA on February 1 this year she had found huge challenges.

"I can safely say that it was worse than I expected," she told the media.

The investigative directorate in the office of the NDPP will  focus on those who have systematically and actively sought to corrupt government ...
News
2 years ago

She said prosecutors in the NPA who had wanted to "fight the good fight" were given a hard time.

"In many ways, we failed the people of South Africa," she said.

Batohi said while it would not be easy, she was confident that the credibility of the NPA could be restored.

She said that part of this effort was for the NPA to be methodical in pursuing cases.

"We cannot go to court and have another Estina Dairy debacle," Batohi said in reference the NPA withdrawing charges against people arrested and charged for corruption in the Estina Dairy case in Vrede, Free State.

Cronje, who was appointed last week to head the investigative directorate of the NPA, said they would be selective in the cases they took on.

"The evidence will determine who masterminds are," she said, later adding that her directorate would focus on cases in which "masterminds" of state capture were pursued while the rest of the NPA would focus on prosecuting other crimes.

She said the directorate would focus on three broad areas: the corruption of the criminal justice system which led to its weakening, crimes involving state-owned entities, and private and public sector corruption.

"It's how to tackle an elephant. We are deciding to take bite-sized chunks," Cronje said.

She has already procured the services of advocate Geoff Budlender to help the directorate develop a strategy. He had previously compiled a report on Trillian’s irregular involvement at Transnet.

Hermione Cronje returns to the organisation in which she had a hand in setting up.
News
2 years ago
Next Article