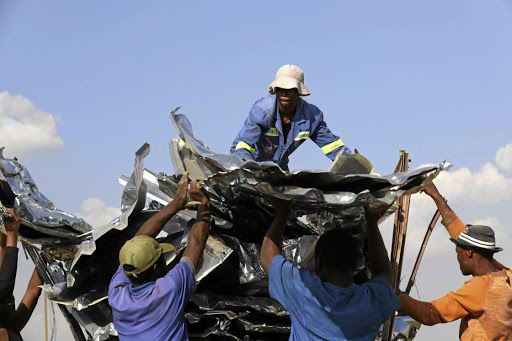 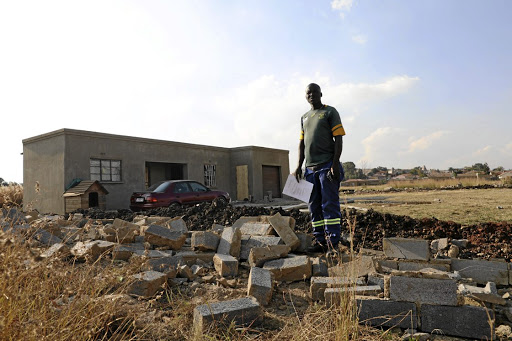 Illegal land invaders were left devastated when their homes were mowed down in Lenasia, south of Johannesburg, after the City of Jo'burg had obtained a court order.

The Red Ants security company moved in yesterday to demolish dozens of homes in Extension 4, as per the court order to evict the land grabbers.

Residents say they were never given notices to vacate the land.

Some of the property owners who had already build permanent structures said they paid R30,000 for the stands while others admitted they grabbed the land for free.

Palesa More, 30, said she had no place to sleep after her two-roomed house was brought to the ground. She said she bought the stand for R30,000 and occupied it in 2017.

"I bought the stand from someone who said the stand belonged to him but he could no longer live there. I was living in my grandmother's house but we were many.

"I was desperate for a place to stay," she said.

More said she went into debt to develop the stand.

The MMC for public safety in the city of Johannesburg‚ Michael Sun‚ says the people invading land have become more organised in their act.
News
4 years ago

Residents have burnt tyres and blocked the K43 road in Lenasia in the south of Johannesburg‚ metro police said on Tuesday. The protest on Tuesday ...
News
5 years ago

"I had to sell my car to buy this stand. I then took loans so that I could build. I am now blacklisted and I can't borrow more money. I am devastated.

"Where am I supposed to go? My mother has been waiting for an RDP for years and I can't afford a bond house, our government is failing us," More said.

Another resident Mamiki Matonzi, 47, said she had been on the waiting list for an RDP house since 1996.

"I have three children; we need a home. I came here because I am desperate for a house," she said.

Some residents said they were warned to remove their belongings as demolitions would continue in seven days.

According to a draft order that was left behind by the officials after demolitions, the city was permitted to serve notice of motion to residents. The city could not be reached for comment yesterday.

Johannesburg Metro Police Department spokesperson Chief Superintendent Wayne Minnaar said: "All the illegal structures will be demolished. Any house that you build illegally, you cannot stay in it.

"We would like to advise people to remove their belongings."