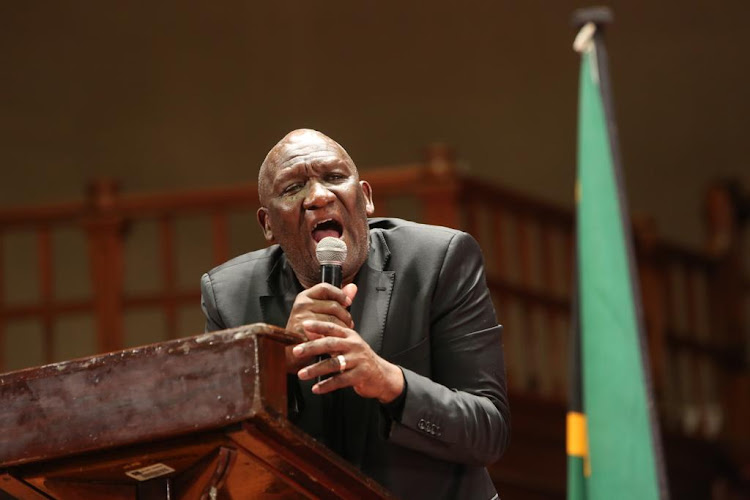 Police minister Bheki Cele at the memorial service on Thursday at the Durban City Hall for two slain eThekwini metro cops who were gunned down while on duty on Monday night
Image: Jackie Clausen

The suspects arrested for the murder of two Durban metro cops on Monday have been linked to a family massacre, in which four people were killed.

This was revealed during a memorial service for the slain metro cops in Durban on Thursday by police minister Bheki Cele.

Sergeant Zephinia Dladla, 61, and his 40-year-old colleague, Constable Sonto Mhlanga, were stationed outside the home of ward 52 councillor Moses Zulu in Bhambayi, near Phoenix, when they came under attack on Monday night.

Police Minister Bheki Cele speaking at the memorial service for Metro Police officers Mhlanga and Dladla who were gunned down this week @TimesLIVE #metrocops #CopKilling pic.twitter.com/LM23uIeydG

"We are establishing that, but from what we hear, they killed a family of four," Cele told the shocked gathering.

Cele's spokesperson Reneilwe Serero confirmed to SowetanLIVE that the three suspects who were arrested in the early hours of Thursday morning, were allegedly linked to the deaths of a family of four in Inanda.

She said police were still investigating whether the massacre was committed as a "celebration" killing.

Cele also said that the killing of any law enforcement official should be treated as treason and that there was a need for an alignment between the laws that govern members of the SAPS and metro police.

“These police officers were simply doing their work when criminals, some as young as 18, years attacked them... This is a waste of life,” said Cele

Meanwhile Mhlanga and Dladla were given a heroes' send-off as church hymns of hope echoed through the Durban City Hall. 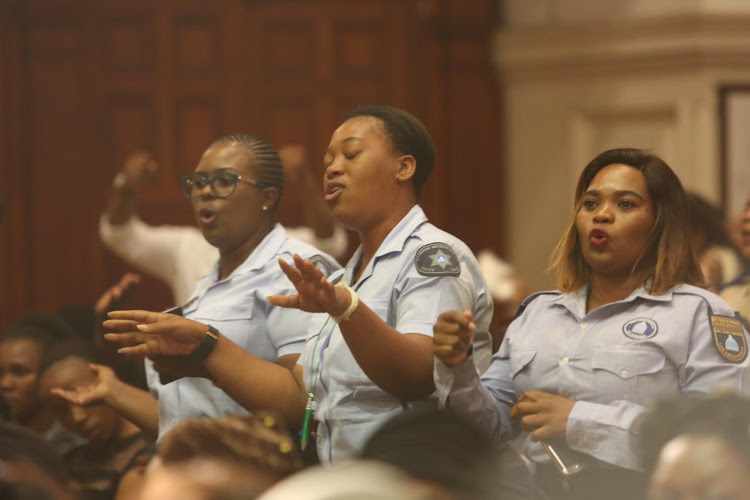 Colleagues of slain eThekwini metro cops sing during a memorial service for the two at the Durban City Hall on Thursday
Image: Jackie Clausen

An emotional friend and colleague of Mhlanga, Hlo Madonsela, described her as someone who was "brave and fearless".

"She always used to say 'My happiness always comes first', she was someone who was always able to bring people together,” said Madonsela.

"Behind the blue badge there is a father with children, brothers and a family. He was like a brother to me, he guided and looked after me, - in-law by name but he was a brother,” said Dladla’s brother-in-law, Reuben Matsimbi.

Both died as they were approaching milestones in their careers; Dladla was close to retirement after 22 years of service while Mhlanga had just received news that she was going to be promoted to acting captain at King Shaka international airport.

They will be buried at the weekend.

Hawks KZN spokesman Captain Simphiwe Mhlongo said members were "still busy with due processes" in relation to the investigation and that the men were expected to appear in court soon.