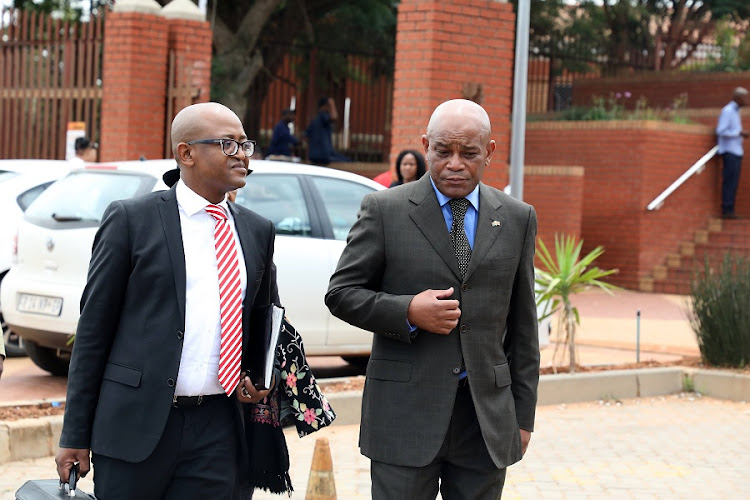 The alleged threat made by businessman Peter-Paul Ngwenya that he would kill his former business associates is a fabrication, the defence argued on Thursday.

"The accused denies emphatically that he uttered the words that he 'would kill these dogs'. It's a concoction," said Ngwenya's lawyer, advocate Nqabayethu Buthelezi, during closing arguments in the Randburg Magistrate's Court.

Ngwenya is facing charges of contravening a protection order and of crimen injuria for allegedly calling Investec chair and former long-term friend, Fani Titi, the k-word in a text message.

The conflict between Ngwenya and Titi stems from a business deal that turned sour.

Ngwenya allegedly sent SMSes telling MRC Media managing director Aqeel Patel "you will bleed," and that Titi would "see his mother" - regarded by Titi as a threat to his life.

Buthelezi said it was improbable that Ngwenya would issue a threat to kill Patel and Titi as he knew his limitations as stated in the protection order.

The protection order prohibited Ngwenya from contacting or threatening Titi and Patel.

"The accused was conscious to the prohibitions of the protection order. Thus there is no escaping the conclusion that the alleged threats are a fabrication that was designed to get the accused arrested as part of the bigger existing fallout between the parties," Buthelezi argued.

According to Buthelezi, Ngwenya's actions were calculated in that he had asked to speak to Josiah Ndlovu and did not ask to be taken to Patel and Titi's offices.

If he wanted, Ngwenya could have gone to Patel and Ngwenya's offices as he was chair of MRC Media, Buthelezi argued.

"Even more improbable is that such a threat [that he would kill Titi and Patel]  would be made directly to Titi and Patel’s personal assistant at the business premises of MRC."

Buthelezi also argued that Ngwenya did not in anyway impair Titi's dignity by calling him a "QwaQwa k****r".

"The word can never be evaluated in isolation, it has to be placed in the context within which it is used," Buthelezi said.

According to Buthelezi, the word k****r was only used to describe Titi's conduct and not to impair his dignity.

Businessman Peter-Paul Ngwenya's use of a derogatory racial term was meant to insult and "dehumanise" his former best friend Fani Titi.
News
3 years ago

Buthelezi also argued that the k-word only becomes offensive when it is used by a white person to a black person.

"The word carries a peculiar sting when used by white people.

"He can't claim that the word is racially abusing him," argued Buthelezi.

The defence argued that until now, Titi has not opened a case of crimen injuria against Ngwenya and that it was the state that opened the case on his behalf.

It further argued that Titi should have testified twice. "First as a complaint to his matter and a witness to the state's case on the charge of crimen injuria."

"We are at the final stage of this trial without a case number for the reported crime, a witness statement where Titi alleges to have his dignity impaired and there is no other evidence outside of what Titi stated in his evidence which can rightfully and convincingly lead the court to the conclusion that Titi's dignity was impaired."

The landmark court case that could determine whether black people can be criminally charged for using the k-word as an insult has been postponed for ...
News
3 years ago

"This evidence by Titi and that of accused clearly show that despite the offensive words being said to Titi, the accused lacked the intent to impair Titi's dignity."

Buthelezi said the evidence led by the state has failed to establish beyond a reasonable doubt that Ngwenya had the intent to impair Titi's dignity.

"In light of all the above, the state has failed to discharge the onus to prove (Ngwenya) guilty on all charges and the accused stands to be acquitted accordingly."

Businessman Adam Catzavelos, who catapulted to notoriety last August after a video of him using the k-word to celebrate the fact that there were no ...
News
3 years ago
Next Article