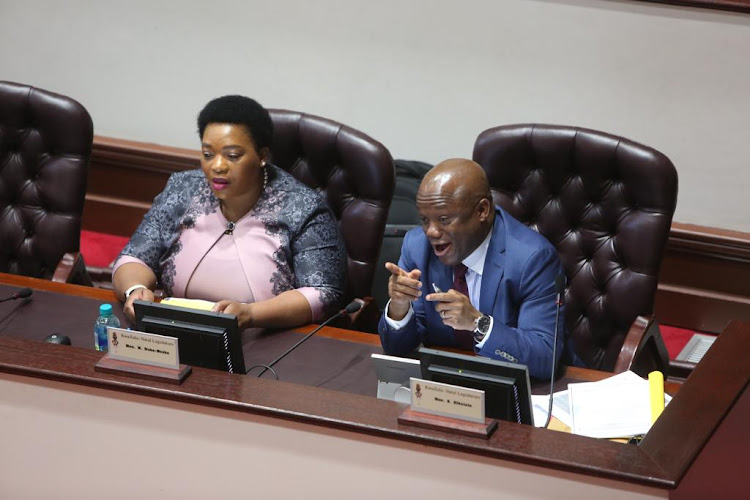 New KZN premier Sihle Zikalala has been accused by the IFP of hatred for not mentioning its former three premiers in his acceptance speech.
Image: Jackie Clausen

The IFP, which has regained its status as the official opposition in KwaZulu-Natal, has already come out guns blazing by accusing newly elected premier Sihle Zikalala of "hatred" by failing to mention the party's former three premiers during his acceptance speech.

In his acceptance speech after being sworn in in KZN legislature on Wednesday, Zikalala paid tribute to the former ANC premiers S'bu Ndebele, Zweli Mkhize, Senzo Mchunu and his predecessor Willies Mchunu for leaving behind "a catalogue of achievements and a wonderful spirit of camaraderie amongst colleagues and comrades".

Although Zikalala, who is also ANC chair in the province, ignored the three former IFP pemiers Frank Mdlalose, Ben Ngubane and Lionel Mtshali, he said: "I must hasten to point out that former premiers and members of this house across political lines, laid a solid foundation for service delivery."

But the fact that he did not mention the IFP premiers by name did not go down well with the IFP leader in the KZN legislature, Velenkosini Hlabisa, who accused Zikalala of "hatred and immaturity".

"He cannot ignore the people who laid a solid foundation for KwaZulu-Natal, Dr Mdlalose, Dr Ngubane and Dr Mtshali. Those were the first premiers of KwaZulu-Natal the province that he will lead. The foundation was laid by those three men," said Hlabisa.

"So now to rewrite history and behave as if they never existed is either immaturity or hatred. He cannot lead this province if he'll act out of hatred because if he wants to be respected, he must take along all the people of KwaZulu-Natal and acknowledge these three men," said Hlabisa.

Mdlalose was the first KZN premier after country's first democratic elections in 1994 but, according to him, he was personally ejected by IFP leader Mangosuthu Buthelezi, both as party chair and premier, in 1997 after he failed to declare Ulundi as the provincial capital. He was replaced by Ngubane.

However, he was perceived to be too close to the ANC which was confirmed when Ngubane later crossed the floor to the ruling party. Mtshali, who was very close to Buthelezi and considered a hardliner, replaced Ngubane in 1999. The IFP lost its majority to the ANC in 2004.

Zikalala downplayed the IFP's criticism, saying he would meet Hlabisa to discuss the matter.

"I hear them talking about hatred, there is no hatred. We participated in the government under them at that time. It's just that it was a short period and there were many premiers. In a platform like this, we have to speak and try to be brief. Anyway, that's not fundamental. I'm going to meet with Hlabisa to discuss it," he said.

In his acceptance speech, Zikalala pledged to work with the opposition parties, saying: "We accept each other as the credible and collective voice of our people in the province."

KZN premier-elect Sihle Zikalala to be sworn in on Wednesday

KwaZulu-Natal premier-elect Sihle Zikalala will be sworn in as head of the province by  KZN judge president Achmat Jappie in Pietermaritzburg on ...
News
2 years ago
Next Article