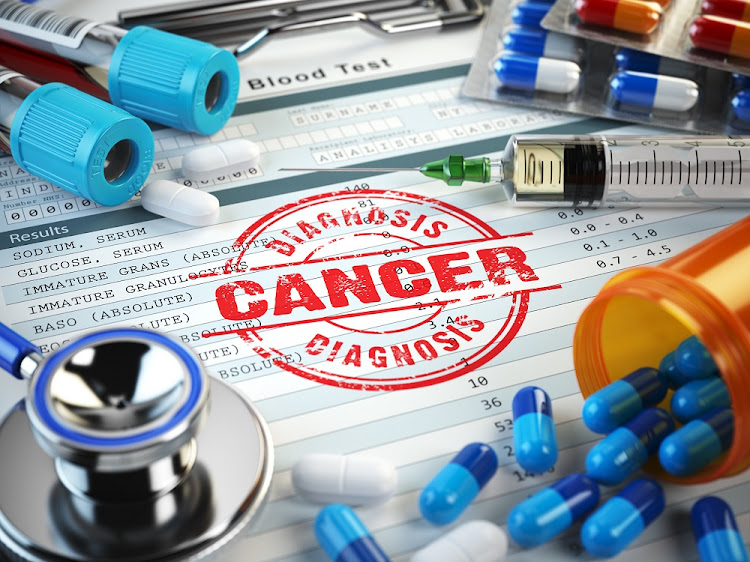 Among under 40s, twice as many women as men are being diagnosed with cancer, it was revealed by Momentum Life at a briefing on its claim statistics for last year.
Image: 123RF/Maksym Yemelyanov

An alarming number of young women are being diagnosed with cancer.

This is if one major life insurer's claims statistics are anything to go by.

Among under-40s, twice as many women as men are being diagnosed with cancer, it was revealed by Momentum Life at its 2018 claims statistics media briefing in Johannesburg on Thursday.

Cancer remains the prime cause of claims across age groups, gender and types of cover - life, disability and critical illness, said George Kolbe, head of marketing for Momentum Retail Life.

"There is just one exception in our claims," he said. "In men between the ages of 40 and 60, cardiovascular disease (heart attacks and strokes) has overtaken cancer."

The insurer's unnatural death claims stats reveal that 45% died in car accidents, 24% were suicides (and of those, 93% were men), 15% were murders and 7% were as a result of surgeries.

The insurer also spoke about the infamous "Ganas" case which exploded in the media last November.

A South African suffering from a form of cancer which affects the plasma cells would have to pay R828,000 for a drug that can be bought for R28,000 ...
News
2 years ago

The company came in for widespread public condemnation for refusing to pay out murder victim Nathan Ganas's R2.4m life policy on the grounds that he failed to disclose, when taking out the policy in 2014, that he had high blood sugar levels.

Having initially defended their decision of the grounds of sound insurance principles, a decision confirmed by the office of the ombudsman for long-term insurance, the company bowed to public sentiment - that the claim rejection was unfair because Ganas died due to bullets, not diabetes - and hastily came up with a "solution".

In cases where they had rejected a life policy claim on the basis of "material medical non-disclosure", they would pay an amount equal to the death benefit - limited to a maximum of R3m - if the person died in a violent crime - regardless of previous medical history.

Widow Denise Ganas got that R2.4m after all, and Momentum announced that the "violent crimes benefit" would apply to all past, existing and future clients.

To date Momentum has paid out five claims to the value of R7.3m, including the Ganas claim. All four of the other claims filed were filed and then rejected due to material medical non-disclosure before "the Ganas matter" and all four insured were also murdered; one in 2005, another in 2006, and the other two in 2017.

As in the Ganas case, their claims were rejected on the grounds of material medical non-disclosure at the time the policies were taken out.

Princess Shanaya, 5, calls for her friends - then takes her last breath

A five-year-old Johannesburg girl who won the hearts of South Africans during her battle against a rare form of cancer took her last breath on ...
News
2 years ago

Material medical non-disclosure is the term used to refer to a case where an insurer believes that the medical information which the person failed to disclose when they took out the policy was so serious at the time that they wouldn't have granted the policy at all had they known about it.

If that's the case, they can deny the claim outright and cancel the policy. In cases where the withheld information would have resulted in a higher premium, based on the increased risk, an insurer is compelled to "reconstruct the policy" and pay out the benefit, having deduced the extra premium from inception to the time of the claim.

Momentum says that it repudiates only four out of every 1,000 claims.

"The Ganas matter was not a great time for us, but the outcome was great," said Momentum Life CEO Johan Le Roux on Thursday.

Some of the company's policyholders had cancelled their policies, but many more had phoned in to say that they didn't disclose a medical condition or test result when they took out their policy, asking if they could remedy that.

"Or they wanted to know what they could do to make sure they didn't fail to disclose something which could lead to a claim being rejected," Le Roux said. "We sent them the application they filled in, and they took it from there."

The insurer has also relooked at its application forms and made the questions clearer and more specific.

WHAT INSURERS EXPECT YOU TO TELL THEM WHEN YOU APPLY:

• Medical information: What have you been diagnosed with? Have you been given a name of your sickness?

• Symptoms: Have you experienced any of this: tingling, chest pains, headaches, cough all the time, back pain.

• Medicines: What medicines do you take regularly, prescription and over-the-counter (OTC). Including illegal drugs.

• Doctor visits and scans: Have you been in hospital, done blood tests, had scans or any medical tests in hospital or anywhere else? From this, the client will indicate yes or no to question which will give us enough info to proceed with underwriting.

So, for example, if you said no to the following questions:

- Have you been diagnosed with back problems?

- Do you have back pain?

- Do you take any medication for pain

And when you claim they discover that you had seen an orthopaedic surgeon and he gave you a prescription medication for pain, that would be regarded as non-disclosure and could impact your claim.