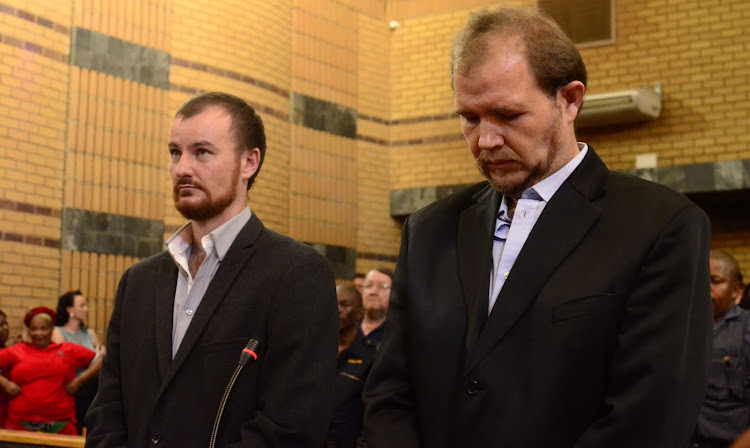 Pieter Dooreward and Phillip Schutte have instructed their legal representative to petition the SCA for leave to appeal their murder conviction.
Image: Tiro Ramatlhatse

Barry Roux will directly petition the Supreme Court of Appeal (SCA) for leave to appeal  the murder conviction of two Coligny farmworkers convicted of murder.

The Mmabatho High Court in October 2018 convicted Pieter Doorewaard and Phillip Schutte of murdering 16-year-old Matlhomola Moshoeu in April 2017. Moshoeu was believed to have been thrown out of a moving bakkie.

After a lengthy trial the two were also found guilty of the boy's kidnapping, intimidation, theft and pointing a firearm.

AfriForum said in a media statement on Thursday afternoon the Mmabatho court turned down Doorewaard and Schutte's application for leave to appeal on Thursday morning. This meant they would now be taking the case to the SCA.

The organisation said it is footing the pair's legal bill "following the admission to four different persons by the only eyewitness in the murder case, Bonakele Pakisi, that he had lied in court in his evidence that he had seen how Doorewaard and Schutte murdered a teenager".

Pakisi told SowetanLIVE in January this year that he was shown a firearm and was forced to read an already prepared statement to "confess" that he had lied in court.

Rapport revealed a recording in January this year in which Pakisi confessed to having lied in court last year, which could see Schutte and Doorewaard freed.

Pakisi was kept in witness protection for the duration of the trial and was released only in August. He allegedly survived two attacks at his home about two weeks ago.

In January, Pakisi went to the local police station and told police that he had been forced by a relative of one of the accused to lie.

Pakisi said an unknown man had come to his house on January 7, and told him that the state advocate Rapula Molefe wanted to see him in Mahikeng. He said he then drove with that man but on arrival in Mahikeng, he was given R1,000 to buy himself "anything nice" while waiting for Molefe.

Pakisi said upon his return, he found Doorewaard's relative, Pieter Kirsten, waiting for him with the man who had driven him to Mahikeng. The driver was later identified as Reverend Paul Morule, who worked for Kirsten.

"I then realised that it was a set-up, I demanded to be driven back home but they refused," he said.

Pakisi said the men then showed him a piece of paper that contained a confession, which he was forced to read out while being recorded. He said Kirsten, a prominent Coligny businessman, also offered him R3m.

Pakisi said Kirsten had told him that he did not have a choice but to read out loud while he was recording him.

"He promised to give me R3m and also to build me a house outside Coligny if I say on record that the evidence I gave in court was a lie," he said.

"This guy [Pakisi] is not in contact with reality and I think it's time for him to be stopped," Kirsten said.

He claimed to have only seen Pakisi twice in court and at the police's inspection in loco.