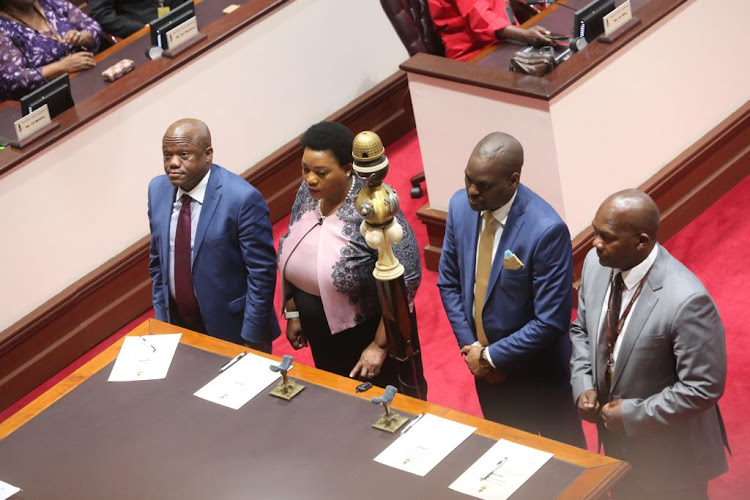 The appointment of Mluleki Ndobe as deputy speaker in the KwaZulu-Natal legislature on Wednesday has ruffled feathers.

The provincial legislature sat for the first time on Wednesday for the swearing-in of Sihle Zikalala as premier, as well as speakers and new MPLs.

Zikalala hailed his election as a responsibility to serve the people of the province, rather than a position. Delivering his acceptance speech after being sworn in by KZN judge president Achmat Jappie in the provincial legislature in Pietermaritzburg on Wednesday, Zikalala pledged that he would not disappoint the people.

The state withdrew a charge of murder against Harry Gwala district municipality mayor Mluleki Ndobe in the Umzimkhulu Magistrate's court on Monday.
News
3 years ago

Zikalala, who takes over from outgoing premier Willies Mchunu, also called on various political parties in the legislature to work together for the people of the province.

"We're coming from different political parities. We must accept each other as the credible and collective voice for the people of KwaZulu-Natal.

"We must therefore conduct ourselves in a manner that gives respect in this house. We're acutely aware that the people of our province expect nothing from us other than expediting the provision of service delivery.

"In this regard we pledge not to disappoint them and to ensure that we remain transparent, respectful and accountable at all times," said Zikalala, who was nominated unopposed for the premiership.

ANC MPL Nontembeko Nothemba Boyce was also elected unopposed as the new speaker of the provincial legislature. She takes over from Lydia Johnson who was among 40 ANC members sworn in on Wednesday.

Jappie wished Boyce "good luck dealing with these good people" as he left the seat to allow her to continue with the proceedings.

However, it was the appointment of Ndobe as deputy speaker that raised eyebrows. Ndobe was recently charged with the murder of the late ANC Youth League secretary general Sindiso Magaqa. However, charges against him were provisionally withdrawn due to a lack of evidence.

In a brief address, Ndobe thanked the ANC leadership for electing him to the position. But his election did not go down well with the IFP which regained its status as the official opposition after the May 8 elections.

IFP leader in the KZN legislature Velenkosini Hlabisa said Ndobe should keep to his promise that he would name and shame those who used the criminal justice system against him after charges against him were withdrawn.

"Ndobe, the deputy speaker, was put into custody for more than 10 days on a case of murder. On his first appearance he was denied bail. On his second appearance apparently it was reported that there was not sufficient evidence for him to be prosecuted and Ndobe went public and said he knows the people who used the criminal justice against him. He will name and shame them.

"All we're saying, now that he has taken an oath, he must tell the truth."

He said unless Ndobe did that "we will not regard him as an honourable person who has taken an oath to tell the truth to the people of KwaZulu-Natal".

"The best thing ... if he cannot name and shame them as he promised, is to resign as deputy speaker," said Hlabisa.