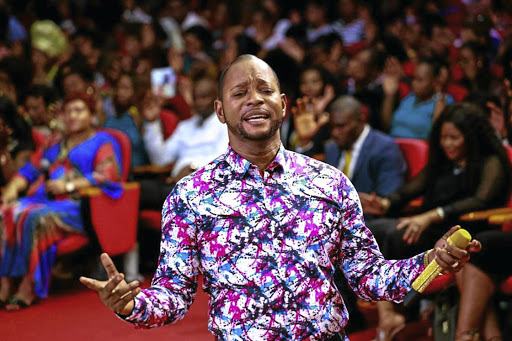 Pastor Alph Lukau of the Alleluia Ministries says he has a special attachment to people who befriended him during his time of distress.
Image: Supplied

Controversial Alleluia Ministries International (AMI) pastor Alph Lukau received support from some of his peers yesterday. The church has been under the spotlight since a video of Lukau allegedly raising a man from the dead went viral on social media in March.

At the time, the church allegedly claimed Elliot Moyo's body had been brought to them by his family after he was said to have died a few days earlier.

Speaking to about 18,000 congregants who had filled the church in Sandton yesterday, a man who introduced himself as Dr Alfred Modise from the South African Union of Churches, said they were against anyone working against the church of God.

"Our mandate is to defend God's church and we want to tell AMI and Pastor Lukau that you are untouchable. They can try you, but they will never succeed. We are prepared to use our intelligence to reach those who are tarnishing your name. We have a clear message for them, you touch God's church, we will mess you up," said Modise to loud applause from congregants.

Celeste Lukau‚ the wife of flamboyant pastor Alph Lukau‚ has likened her husband to Jesus‚ saying he has been crucified for helping to heal others.
News
2 years ago

One of the pastors told the congregation that there were pastors and bishops from 17 churches from SA and abroad who came to show their solidarity with Lukau.

Modise was believed to have been taking a jab at pastors who have been staging sit-ins outside the church's premises after the resurrection saga, including Prophet Paseka "Mboro" Motsoeneng.

But a close ally of Lukau denied the claim. "No, that was a general preaching and had nothing to do with individuals. The man of God wants to make peace. There are enemies who plotted the resurrection thing. But we can't talk more about it for now, due to legalities."

Nkululeko Dlamini, 35, and Silungisani Grace Sibanda, 40, have been charged with three counts of fraud in connection with the "resurrection".

Yesterday, Sowetan attended the 9am service. Some congregants came from as far as the UK, Ethiopia, Jamaica and Nigeria. People testified about how the church had changed their finances, healed their loved ones and helped them with finding employment.

As if to illustrate his peace mission, during his sermon Lukau quoted Acts about people who were paid to lie about others but were forgiven.

"Today was my first encounter with Dr Modise ... I pray that the body of churches should be united. I have special attachment to people who befriended us during the time of distress," said Lukau.

For many, religion is a deeply personal undertaking but for others, it's an opportunity to make some quick cash. With some of South Africa’s churches coming under the spotlight in recent months, we take a closer look at some of the country’s more unconventional churches and what brings people to them.

Prosecutor Mzamo Mathe said the state wanted the Deputy Director of Public Prosecutions to decide on the charges that the two would face.
News
2 years ago

Police are not keen to withdraw charges of fraud against the man who was “resurrected” by controversial pastor Alph Lukau, saying they still need ...
News
2 years ago

Pair arrested for hoax resurrection by pastor to apply for bail

Two people are expected to apply for bail  after they were arrested on charges of fraud in connection with the hoax resurrection performed by pastor ...
News
2 years ago
Next Article