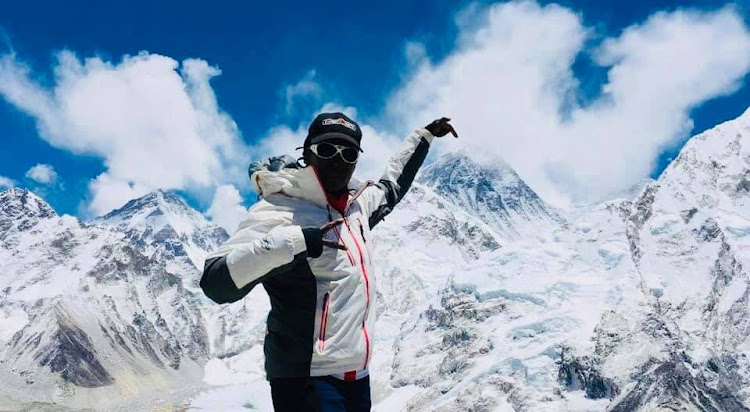 Saray Khumalo, the first black South African woman to reach the top of Everest. Supplied by Summits with a Purpose Facebook
Image: Facebook

Saray Khumalo, the first black African woman to reach the top of Mount Everest, arrived back at base camp on Saturday, two-and-a-half days after summiting the world's highest peak.

She had been out of reach between Camp 3 and Camp 2 on Everest due to a flat satellite battery, but made contact with a friend via a text message on Saturday morning.

Arguably, the most dangerous part of the climb is going down. Summits with a Purpose, Khumalo's fundraising arm, explained in a media release that most deaths happen on the descent.

"Mountaineers all appreciate that [reaching] the summit is actually only halfway, with the majority of accidents or deaths occurring on the way down due to fatigue," the organisation said.

Khumalo was not ready to speak to media on Saturday evening and needed to rest, said her spokesperson Jeanette McGill.

One African is looking down on all of us today.
News
3 years ago

Two of Khumalo's team members died on the way back from the summit. On Thursday, Seamus Lawless of Ireland fell from an 8,300m high area, called the Balcony. Also on Thursday, Ravi Thakar from India died in his sleep at Camp Four, which sits at an altitude of 7,900m.

Summits with a Purpose explained on its Facebook page that as climbers descend from 8,000m-high mountains, they begin to breathe more easily and think more clearly.

"With each additional step downhill the oxygen gets thicker, you eventually remove the cylinder and face mask because it becomes irritating... you even warm up at last ... and you start feeling much better," the organisation posted.

As one gets closer to base camp "your thoughts return and turn to a favoured base camp meal, or the first real shower, a real bed and even a toilet seat".

Posted by Summits with a Purpose on Saturday, 18 May 2019

This was Khumalo's fourth attempt to reach the top of the world.

A release on her journey reads: "With perseverance, grit; prayer and courage she returned to Mount Everest in 2019."

Everest base camp, where she is now based, is a place she knows well. In 2015, after an earthquake, she had to her abandon her climb at the camp, and in 2014 she also ended her climb there.

Her trip to the top of Everest took five days. Saray arrived at the base camp on April, 20 after trekking up the Khumbu Valley from Lukla, Nepal.

The release states that on April 26, she left for "her acclimatisation rotation, to support the body adapting to the reduced air pressures".

After the rotation she "rested for a few days while bad weather associated to Cyclone Fani passed, and the rope fixing was completed".

She set off on May 12 and was "standing on the top of the world five days later".

Over the past 23 years, there have been 78 attempts by South Africans to summit Everest, with 36 reaching the peak.

Saray Khumalo’s Summits with a Purpose initiative was set up to raise money in 2013.

Khumalo was born in Zambia, is of Rwandan descent, and holds South African citizenship.

In this expedition she has been fundraising for the Dr Thandi Ndlovu Foundation.