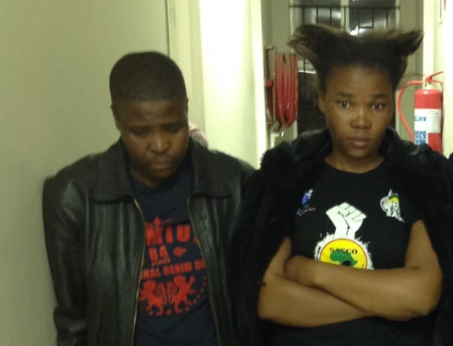 Ntokozo Priscilla Nkosi and Zintle Marcia Makhanya who were allegedly found in possession of cash believed to have been taken in a eSwatini bank robbery.
Image: Supplied / SAPS

Two women who were allegedly found in possession of money believed to have been taken in a bank robbery in neighbouring eSwatini appeared in the Eerstehoek Magistrate's Court on Friday.

Their case was postponed to May 23, said Col Mtsholi Bhembe.

The robbery took place on May 8 in the Matshapa area. He confirmed that the two, Ntokozo Priscilla Nkosi and Zintle Marcia Makhanya, were South African nationals.

One of the them was alleged to have carried out the brazen bank heist by posing as a man and storming into the bank, armed with a gun.

"Information revealed that a bank robbery took place on May 8 at Matsapha wherein a woman disguised as a man and armed with a firearm stormed into the bank holding a teller and a security guard hostage. They were ordered to fill a big bag with cash," said Hlathi.

Police did not disclose how much money was taken.

"A few days after the incident, a probe by the REP revealed that the robbery may have been a collaboration among the bank teller, the security guard and the duo.

"The teller and the security guard were traced and arrested. Investigations established that the loot had been smuggled into SA where it was to be kept safe at Nhlazatshe, Elukwatini, near Badplaas until it was safe to share it among the four," Hlathi said.

As investigations continued in SA, police traced the two women to Tjakastad where they were arrested.

They were charged with possession of suspected stolen cash.

The woman who disguised herself as a man was expected to later appear in an Eswatini court where she would join the security guard and teller in the dock for their part in the crime.