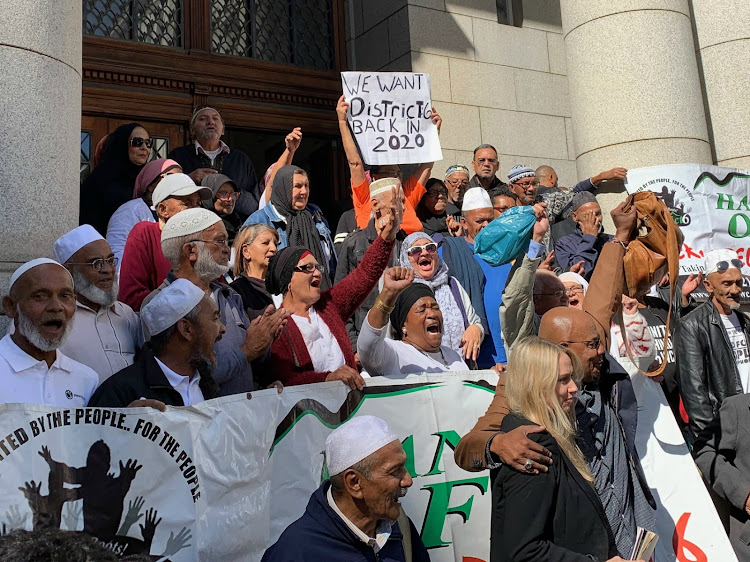 After a month of waiting, District Six claimants will finally get their chance on Friday to challenge land minister Maite Nkoana-Mashabane on restitution plans.

"In the three months which have elapsed since the meeting of February 15 2019, the D6WC has not received any approach from the minister, the Land Claims Commission or the department of rural development and land reform to meet for 'follow-up consultations'," read Ajam's affidavit.

"Should the minister require the assistance of the D6WC in finalising the holistic plan for District Six, the D6WC will make whatever contribution it can and co-operate as far as it is able to go."

This was a response to the land minister’s affidavit, submitted on May 6, which unveiled tentative plans for rebuilding District Six. The plan showed a mix of restitution and market housing to help fund the project.

The minister blamed a lack of funds and the amount of available land for delays. And she said her department could offer only R351m of the expected R11bn cost of the proposed plan.

On a morning when the District Six Working Committee and former residents of the area expected to witness government accountability and a future ...
News
3 years ago

Ajam was not pleased with this news.

"In essence what she's saying is that they don't have the money to build the houses and only now have looked to external partners," Ajam said in a WhatsApp message to SowetanLIVE sister publication TimesLIVE, calling the delay "absurd".

District Six claimants expect to finally get their chance to hear the land minister explain why a court-ordered restitution plan had not yet been finalised, a month to the day since she failed to appear in court.

The court will hear arguments from the land department on why the minister should not be held in contempt for missing the mandatory court appearance last month.

Nkoana-Mashabane must also explain why the restitution project remains delayed and how her tentative plan solves the issue.

"It's going to be very interesting to see if the minister will be able to explain away the many inconsistencies and shortcomings of her department over the last 20 years," said Ajam.

"Many hopeful elderly claimants have died during this period, never realising their dream to come home."

Ajam has been active in the days leading up to the court date, encouraging members of the community to picket outside court.

Claimants were dispossessed in 1960s
News
3 years ago
Next Article