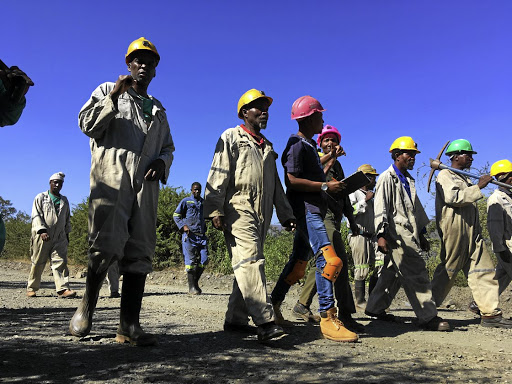 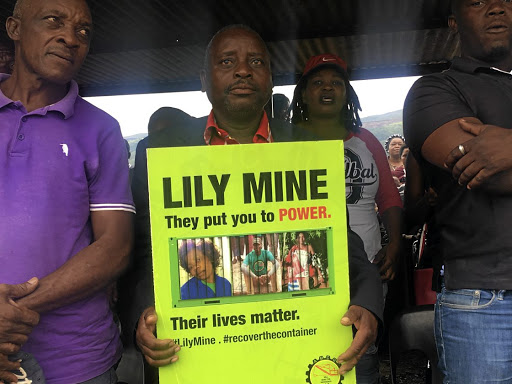 A large group of former Lily Mine workers have gone underground to search for three colleagues who have been trapped since 2016.

At least 30 of the more than 1,000 former employees who have been camping at the mine outside Barberton in Mpumalanga, went underground yesterday, saying they were willing to risk their lives in their quest to find the trio.

Pretty Nkambule, Yvonne Mnisi and Solomon Nyirenda have been buried underground following an accident that swallowed a container they were working from on February 5 2016.

Search and rescue missions were suspended after weeks due to safety issues.

"We have waited for three years thinking the mine is going to be reopened and we will get our brother and sisters [to the surface] but these mine owners don't want [to reopen]," said mine worker Skhumbuzo Mbandze.

"The department of mineral resources (DMR) has also let us down by not forcing these people to reopen the mine as they promised.

Lily Mine families and workers are paid promised cash

Lump sum compensation payouts have been made to the families of mineworkers Pretty Nkambule‚ Solomon Nyerende and Yvonne Mnisi who were killed in a ...
News
5 years ago

"So, we have no choice but to lay our lives on the line, although the mine declared it unsafe, and enter in a quest to find our loved ones," said Mbandze.

Last week, Sowetan reported that the former miners had been camping outside the mine, demanding that it should reopen so that they can find the trio and continue working.

The new mine owners, Siyakhula Sonke Empowerment Corporation (SSC), said the mine was being delayed from reopening by the previous owners.

Mbandze said: "We worked for years here, we know this mine. We have people among us who know it better by the rocks. We are miners and skilled. Ours now is to remove the backfills and reach the solid rocks and blast ... from there we will see where the container is.

"We have 30 men who volunteered to enter and we will have day and night shifts," said Mbandze yesterday morning.

Five of the volunteer miners were arrested and charged with trespassing and released on Tuesday.

Mpumalanga police spokesperson Brig Leonard Hlathi denied that they arrested the leaders of the miners but said they took them in only to "talk to them".

"We [wanted to] explain to them the contents of a court order [obtained by the mine]. They are not allowed to be in the premises of the mine," said Hlathi.

15 families get houses thanks to David Mabuza’s generosity

Fifteen families in Barberton‚ Mpumamanga‚ will wake up in new houses thanks to Deputy President David Mabuza fulfilling his promise to build them ...
News
3 years ago

He also warned the miners against entering the mine, saying DMR declared the mine unsafe.

"The mine is not safe, which puts their lives in danger too," said Hlathi.

However, Mnisi's father said he welcomed the miners' efforts. "These young men are feeling the pain [we are feeling] and want to go down there and we are with them ... wishing them all the best because no one wants to help," said Mnisi.

McChesney said as far as he was aware, the miners evicted from the property on Tuesday.

DMR spokesperson Ayanda Shezi said the mine was closed. "[It] has been closed since the accident. The department would have to first declare the area as safe before mining can resume," she said.