There are no limits, says Cape Town nuclear boffin hitting the heights 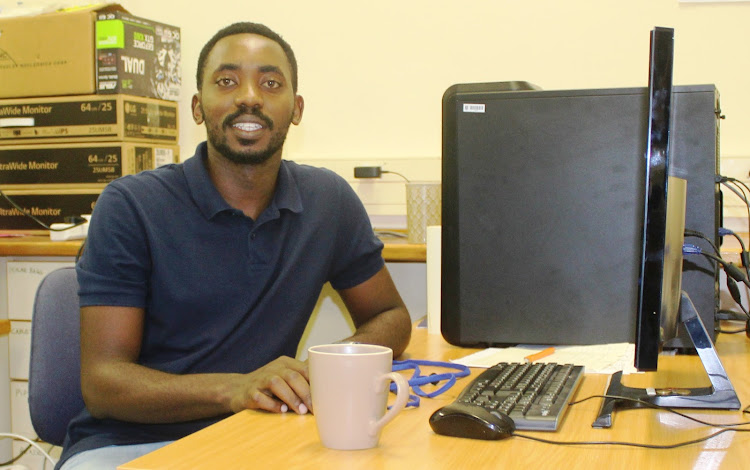 Nuclear physicist Cebo Ngwetsheni at work at the University of the Western Cape.
Image: UWC

A South African nuclear physicist has made it into one of the world's leading scientific journals with his research on nuclear polarisation.

Cebo Ngwetsheni, who is studying for his doctorate at the University of the Western Cape, is the first author of a paper published in Physics Letters.

It is the the first time a paper prepared solely at UWC has been published in the journal,   which published the Nobel-deciding discovery of the Higgs boson - also known as the "God particle".

Ngwetsheni's paper - likely to be incomprehensible to almost everyone outside his field - is entitled "Continuing influence of shell effects at high-excitation energies".

The abstract begins: "Empirical drops in ground-state nuclear polarisabilities indicate deviations from the effect of giant dipole resonances and may reveal the presence of shell effects in semi-magic nuclei with neutron magic numbers N=50, 82 and 126."

Tasks often include overseeing waste management schemes, such as at landfill sites.
SebenzaLIVE
2 years ago

Ngwetsheni, who grew up in Queenstown in the Eastern Cape, said he had always wanted to be either a scientist or an engineer.

"In third year, I started developing a real passion for nuclear physics: getting to research deeper into the core of matter was quite interesting, and I found I understood it better than other subjects - and wanted to understand it even better."

He said his success was not only about his own career - he also wanted to help others.

"I want to have an impact when it comes to development of technology and knowledge and to set an example for people from the communities - to help them see that there’s so much they can do, so much they can be," he said.

"My dream is to contribute to the ultimate quest for understanding the natural world - and to inspire others to see that they can do it too."