Taxi boss gunned down while taking kids to school 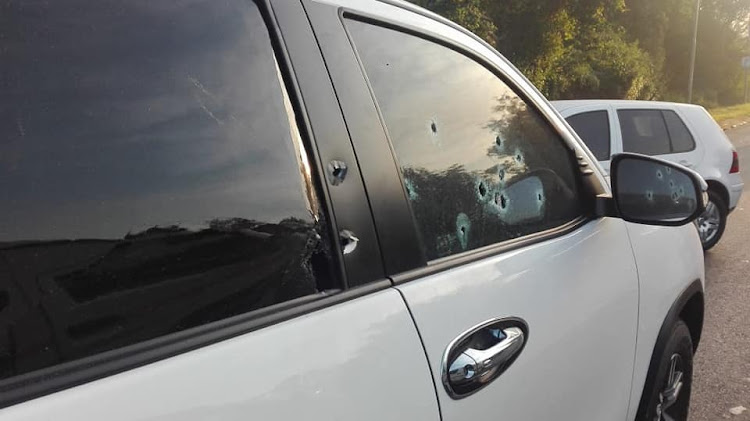 Bullet holes in the Toyota Fortuner belonging to a father who was gunned down in Verulam while transporting children to school.
Image: Supplied/Reaction Unit SA

A taxi boss was gunned down while transporting his son and two other children to school in Verulam, north of Durban, on Wednesday morning.

"At approximately 07:12am a motorist drove to RUSA offices in Verulam reporting multiple shots being fired at a white Toyota Fortuner. RUSA members responded to the scene and upon arrival found three hysterical children approximately 40 metres away from the bullet-riddled SUV," he said.

Paramedics assessed the man and found that he had sustained multiple gun shot wounds to his head and body.

"Due to the extent of his injuries he died at the scene," Balram said.

Three hysterical children were found near the vehicle which came under gunfire in Verulam.
Image: supplied/Reaction Unit SA

Witnesses told RUSA that the Toyota Fortuner was approaching the single lane steel bridge when a red VW Polo stopped next to it.

"The occupants of the VW Polo then opened fire at the driver before the gunmen sped off towards the Verulam CBD," Balram said.

The children, who were being transported to Crawford College, were seated behind the driver and were not injured.

"Approximately 21 9mm spent cartridges were recovered at the scene. The motive for the shooting is unknown at this stage," Balram said.

Lawyers for Mamelodi's notorious taxi boss Vusi "Khekhe" Mathibela are arguing in court that police gave him his passport back to travel to Mauritius ...
News
3 years ago

Mamelodi's notorious taxi boss Vusi "Khekhe" Mathibela will have to wait a bit longer before knowing if his bail in the murder case of businessman ...
News
3 years ago
Next Article