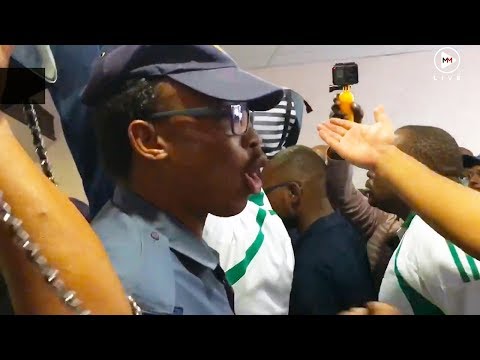 A commotion broke out at the Durban Commercial Crimes court on Tuesday when supporters of embattled eThekwini mayor Zandile Gumede and some policemen stopped journalists from taking pictures of the politician.

The trio appeared in court on Tuesday after handing themselves over to police in connection with a raft of charges including fraud, corruption and racketeering. They were each granted R50,000 bail.

Somaroo raised concerns over the integrity of the probe and the protection of witnesses since Gumede will not be suspended as mayor.

Image: Gallo Images / The Times / Jackie Clausen eThekwini Mayor Zandile Gumede and her co-accused are free on R50,000 bail until their trial continues in August. The magistrate expressed concern that Gumede has not been suspended from her position.

Bail conditions include that Gumede is to refrain from interfering with municipality operations, communicating with any officials from certain municipal departments including supply chain and Durban Solid Waste, or institute any disciplinary action against officials.

She must also hand over her passport and is prevented from applying for new travel documents.

The matter was remanded to August.

After the hearing, Gumede's supporters used jackets and bags to prevent photographers who were waiting at the court entrance from doing their work. There was an exchange of words between media and supporters, forcing police to intervene.

Some police refused to allow journalists to take pictures or follow the mayor as she and her party exited the building.

In a statement issued on Tuesday, the ANC regional executive committee said it noted the appearance of Gumede and Mthembu and the charges they faced.

"We would like to reiterate our faith in the justice system and hope that this matter will be treated with the respect and integrity it deserves.

"We subscribe to the principle of innocence until proven otherwise, which is a tenant of our jurisprudence. We are a strong believer in the rule of law and the principles of natural justice. However, we know that the court of public opinion doesn't subscribe to these principles. We therefore urge everyone to respect the court as the only competent body to pronounce on its outcomes."

Shortly after Gumede's appearance, the city issued a brief statement saying it would "co-operate fully" with the legal process involving Gumede and Mthembu.

The municipality assured residents that the matter would not affect service delivery to communities.