Three men were arrested on Monday in connection with three murders in the Western Cape coastal town of Hermanus. 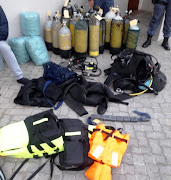 Image: SA Police Service Diving equipment seized in the Hawston raids on May 13 2019.

"In pursuit of known suspects, 10 residential properties and a total of 31 people were searched, which resulted in three suspects, two aged 39 and one aged 29, being detained for questioning in connection with three separate murders perpetrated in the Hermanus area during 2016, 2018 and another earlier this year," said Traut.

He said the search operation also led to the seizure of R661,453 in cash, 77 cellular telephones, 14 laptops, 20 sim cards, and electronic and diving equipment.

"It is believed the diving equipment is used for poaching and that the cash was raised through the proceeds of crime," Traut said.

Traut said the three suspects would appear in the Hermanus Magistrate's Court once they had been charged.