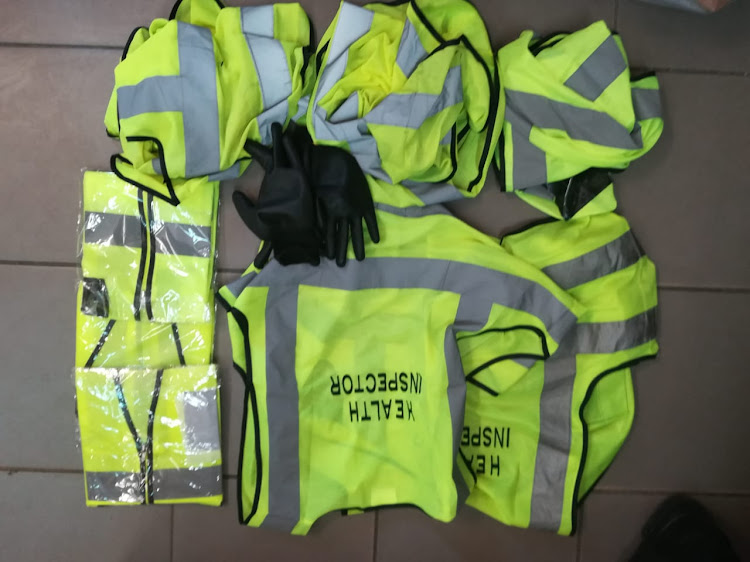 Reflective jackets and fake documents were some of the items that were seized by police, after three fake health inspectors were arrested on the KwaZulu-Natal south coast.
Image: South African Police Service

Three people who posed as KwaZulu-Natal health department inspectors will appear in court on Wednesday on extortion and fraud charges.

Provincial police spokesperson Col Thembeka Mbele said the trio was arrested on Friday last week after pretending to be representatives of the health department when they visited a supermarket on the south coast.

"They approached a supermarket on Nelson Mandela Drive in Port Shepstone and proceeded to check the expiry dates on various items.

"They allegedly then further requested the storekeeper to make a cash payment to them. The owner of the store then contacted the department to confirm the visit. This resulted in the three suspects fleeing in their vehicle," said Mbele.

They were arrested in Hibberdene after being spotted by community members.

"A vehicle with false registration plates, reflective jackets, fraudulent documents from the department of health, identity cards as well as stamps found in the suspects' possession were seized."

Mbele said the car they used was hired and fitted with fake department of health signage.

"The suspects aged between 34 and 38 are expected to appear in the Port Shepstone Magistrate's Court on Wednesday May 15. They face charges of extortion and fraud," she said.