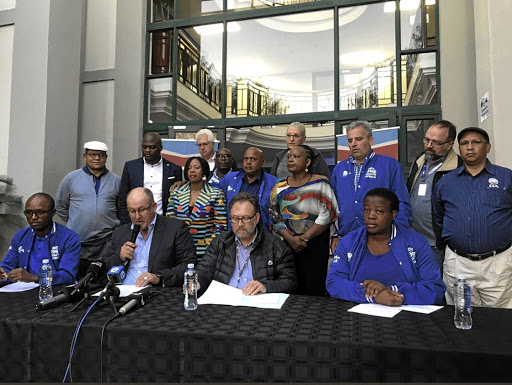 DA leader Mmusi Maimane is not going anywhere despite growing calls for him to step down.

The party's federal executive yesterday said Maimane will remain at its helm at least until the DA's elective congress in 2021.

The FedEx also said the party will not waiver on its racially inclusive policy despite tangible proof that it has alienated some white voters who turned to the Freedom Front Plus.

Some DA members have pinned the loss of voters on Maimane. This has sparked social media jokes that Maimane was headed for Harvard University - a reference to how former DA parliamentary leader Lindiwe Mazibuko was sent to Harvard after a fallout with former party leader Helen Zille.

Top party officials told Sowetan that some of its members are pushing for black leaders, including Maimane, to be made scapegoats for its poor showing at the polls.

But the fallout over the party's decline in the national elections intensified, with Maimane's backers pointing fingers at former leader Helen Zille's controversial views on colonialism among others as the reason for the DA's black vote decline.

"Everyone seems to be missing Helen's role in obliterating DA's chances with black voters. Her comments about colonialism obliterated the trust we had worked hard to build," said a DA leader who preferred anonymity.

Zille came under fire last year for suggesting that colonialism did not only have a negative impact.

"Do you genuinely believe the legacy of colonialism was ONLY negative?" she asked in a tweet.

A DA leader said: "People don't forget and the trust, which is our main blockage to gain support of black voters, was destroyed by her".

In her reply, Zille said: "Just go and look at the results, disaggregate the voting patterns, do the proper analysis and you won't take this kind of nonsense seriously. Analyse the statistics. That is the only way to do it".

The DA suffered a 1.46% decline in its support during the national and provincial elections, which saw the party losing five seats in National Assembly. This was the first time since 2004 that the party's support has dropped.

"We made it clear that he's not going anywhere," said FedEx member and provincial leader in KwaZulu-Natal Zwakele Mncwango.

"We never pinned any decision on Mmusi because no one takes a decision alone. We are a collective and we take a collective responsibility," Mncwango said.

Another FedEx member, Yusuf Cassim, said they were concerned about the decline in numbers and that they were aware that some of their supporters either stayed at home during the polls, while some voted for the Freedom Front Plus, but no one blamed Maimane for this.

"We are concerned [about the decline] and we will go back to get those votes, but no one has said that Mmusi must step down. Actually, when Mmusi spoke everyone applauded," said Cassim.

"What Mmusi was saying was about the message of building one South Africa and that we are not going to abandon it. We're fighting for one SA and that mission is historic."

Cassim said the belief was that Maimane had been a plausible leader who had previously helped grow the DA.

"In fact in 2016, Mmusi led us to growth. It [inclusive
policy] has worked up to now and just because there's one election that we have
not grown then you don't defend? No."

DA deputy federal chair Athol Trollip said the decline could be attributed to the change in the country's political landscape.

"We were faced with internal challenges and significant changes in the political landscape, the rise in [racial] nationalism on both the left and the right.

"In short, both internally and externally there were matters we had to grapple with. We will be the first to state that these factors had a role to play in our electoral fortunes," said Trollip.

Trollip also said Maimane's future was not up for discussion.

"We would like to state that Mr Maimane remains our leader until a federal congress, scheduled for 2021, decides others.

"Any talk of change of a leadership before a federal congress must be dispelled. As the leadership of the party . we are unambiguous in our support for Mr Maimane who has led the DA with exemption since the 2015 Nelson Mandela Bay federal congress."