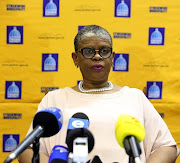 Image: Thuli Dlamini eThekwini mayor Zandile Gumede is expected to hand herself over to the Hawks on Tuesday and then appear in the Durban Commercial Crimes Court on a raft of corruption charges.

eThekwini mayor Zandile Gumede is expected to hand herself over to the Hawks and appear in the Durban Commercial Crimes court on Tuesday on a raft of corruption charges.

Senior sources close to the investigation confirmed that Gumede, with the support of her legal team, will hand herself over to the Hawks to avoid being arrested. She is then expected to appear in the Durban Commercial Crimes court.