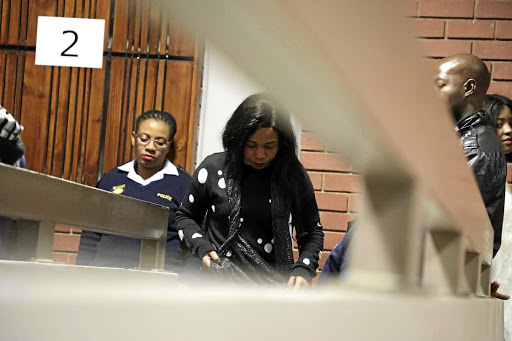 The woman who is accused of fraud and possession of a stolen vehicle of a deceased Ekurhuleni medic has told the Benoni magistrate's court that the man was her "blesser".

Malibyane Maoeng, who has been dubbed the "Black Widow", was last seen with 62-year-old late doctor Sankubele Dire before his death at a lodge in Sasolburg, Free State, in July.

Maoeng, 30, from Lesotho was arrested after Dire's death and she was found in possession of the medic's white Mercedes-Benz. Dire was found with froth in his mouth.

Maoeng's lawyer Maleba Modikga told the court yesterday his client had a three- year relationship with Dire before his death.

Modikga read Maoeng's statement, which said she left Dire alive at the lodge and had taken the car with his permission.

Maoeng also said Dire had given her permission to use his credit card.

The state has alleged that Maoeng went on a spending spree using Dire's credit card two days after he was found dead.

She allegedly bought a double-door fridge, a washing machine, a bed and a carpet - all totalling R21,000.

She further allegedly withdrew R5,000 to pay a deposit for an apartment she was going to rent in an estate.

Maoeng told the court the medic was supporting her financially throughout their relationship and even gave her his bank cards' pin numbers.

"My client told the court that she had gotten permission to use the credit card and the car since Dire was aware that she was moving into a new apartment," Modikga said during the cross-examination of Dire's daughter and witness Nomava.

The women who was last seen with the doctor found dead in a lodge is expected to appear in the Benoni magistrate's court on Thursday.
News
3 years ago

"The phones were found with her when she was arrested at her newly rented apartment in Benoni, Blue Lakes Estate," he said.

Fourie also told the court that Dire's belongings that he had left in the car were found inside a dustbin outside a house Maoeng was initially renting before she moved to the estate.

"A tenant in the yard notified us that there was an ID, a watch, driver's licence and medical documents that were thrown inside a bin by the accused," he said.

Fourie also revealed that cellphone downloads indicated that Dire's phones and credit cards were used in the Benoni and Daveyton areas.

The medic's daughter said she strongly believed that her father was poisoned and killed by Maoeng.

"If and when a person borrows you his car and credit cards, why would he also give you his phones as well?

"My father would not have given a mistress his credit cards to go and paint the town red," said Nomava.

She gave the court a print-out of bank statements and purchase receipts showing transactions and fraudulent signatures used during the spending spree.

The Benoni Regional Court on Tuesday postponed the bail application of murder accused Malibyane Maoeng, 26, due to delayed cellphone download reports.
News
3 years ago
Next Article