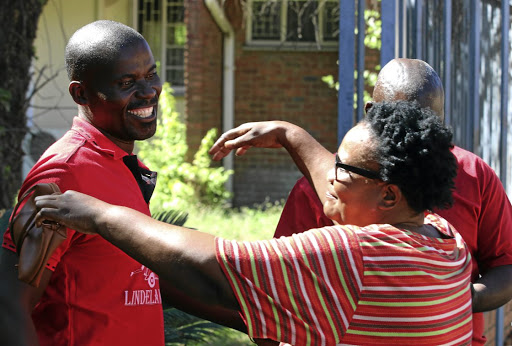 Arnold Mulaudzi, deputy chairperson of the Pro-Makhado Demarcation Task Team, is hugged by his sister Catherine Ragimana, 58, after his release yesterday. /Antonio Muchave

At least three people, including a community leader in Vuwani, Venda, have been released on bail following their arrest for contravening the Electoral Act.

Two of the men were granted bail of R5,000 each in the Giyani magistrate's court yesterday. Victor Mabundza, 35, and Vutomi Maluleke, 30, are accused of blocking IEC officials from entering a house where a senior citizen was set to cast her special vote at Guwela village outside Giyani on Monday.

Speaking on the sidelines of the court proceedings, defence lawyer Silence Mthombeni said the state did not have a case against his clients.

"Maluleke was not even at the scene on that day. He was at work. Mabundza was [also] not there when the whole incident happened.
He only came later because people had gathered there," Mthombeni said.

He said he was optimistic the state will withdraw the charges against his clients. The case was postponed to June for further investigations.

Residents from at least 10 villages, including Makhuva, Mnghongoma, Mbhedle and Mageva, staged protests earlier this week, demanding that a 37km road be tarred, preventing special votes from taking place.

Police spokesperson Brig Motlafela Mojapelo said the IEC officials were about to enter a homestead at around 11am in Guwela when the suspects confronted them.

"They were going to assist a senior citizen to cast a special vote when a group of men approached them and prevented them from executing their duties and [also] damaged the ballot papers," Mojapelo said.

In Vuwani, Pro-Makhado Demarcation Task Team deputy chairperson and its acting spokesperson Arnold Mulaudzi was arrested on Tuesday and charged with intimidation and contravention of the Electoral Act.

The Electoral Commission of SA said five voting stations had not been opened for voting as a result of ongoing community unrest in the Eastern Cape ...
News
3 years ago

The Vuwani magistrate's court released him on a R5,000 bail yesterday and the case was postponed to June 3.

Task Team chairperson Takalani Mukhudi said they had resolved to suspend the protests until they engage with government.

Residents of the area want to be returned to the Makhado municipality, claiming that they were not getting proper service from the Vhembe district municipality.

"I need to indicate, though, that we are still holding on to the principle of fighting to go back to Makhado.

"We are going to engage with government, starting on Monday," said Mukhudi.