Writing on the 'wall' shocks 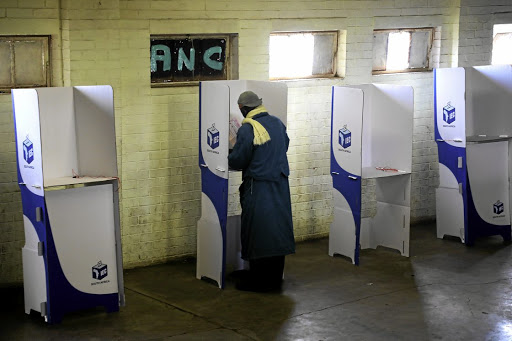 Voters at a Sebokeng hostel polling station were shocked when they were greeted by a screaming ANC painting on a black-painted window. The venue drew many voters before it could even open its doors yesterday. /Thulani Mbele

The Independent Electoral Commission (IEC) will investigate an incident where a window painted with ANC letters was left unblocked inside a polling station at Sebokeng hostel in Emfuleni.

Sowetan captured the picture of voters making their mark inside the booth with a black-painted window with letters of the ANC in mint colour staring back at them.

IEC provincial spokesperson Boitumelo Bonaki said the facilities used by the commission were leased and not owned by the entity.

The Sebokeng hostel, which previously housed migrant workers, had been eyed by the Emfuleni local municipality for reconstruction into family units in 2011.

"No political parties are allowed to campaign inside the polling stations. It is regrettable that the officials who leased the facility were not sensitive enough to cover the window. The matter is being investigated by the area manager responsible," said Bonaki.

The voting station, a small community hall situated inside the blocks of old apartheid hostels, drew many voters before the station could even open at 7am.

Inside, the IEC officials were still deliberating on the legitimacy of a box containing special votes cast the previous day, resulting in voting resuming after 8am.

Despite various issues - which included five voting stations not being open by late afternoon, shortages of ballot boxes and confusion over fake ...
News
2 years ago

Seventeen voting stations were still closed on Wednesday at 11.30am - but voting is generally “proceeding well”.
News
2 years ago
Next Article