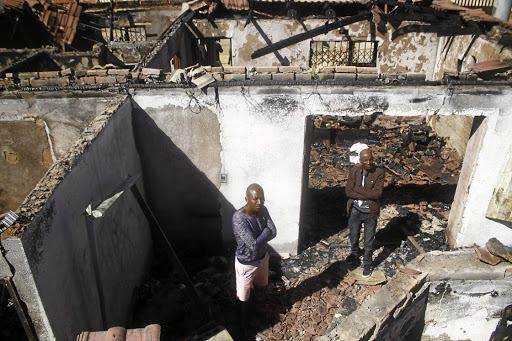 A father and his son were left devasted after they had to run out of the house when it started to go in flames while they were asleep. The two now have to rely on the community to help them with basic needs. KABELO MOKOENA

A family from Ekurhuleni wants the municipality to rebuild their house and replace their furniture after their home was gutted by a fire allegedly caused by an electric fault.

Sthembile Rasmeni, 53, of KwaThema lost everything he worked for in a fire that was allegedly caused by electricity cables dug up in front of his house.

"The municipality dug up the big hole to move an apollo light more than three months before the fire, but it has now cost me my house and all I've ever worked for," said Rasmeni.

He said since the April 27 incident, he and his relatives have been sleeping at a neighbour's house.

They have no clothes, blankets, food and identity documents.

Rasmeni told Sowetan he was grateful to be alive and recalled how he escaped the raging fire.

"I was sleeping with my 27-year-old son in the house. We were woken up by flames that started from the power box outside our home and spread through the ceiling and the rest of the house," he said.

'I don’t know where to start': Stranded Alex fire victims speak out

Days after a deadly blaze tore through Alexandra’s informal settlement Stjwetla in Johannesburg, residents said they had no immediate hope of ...
News
3 years ago

His son Mpumelelo said losing his home has left him devastated. "I'm a deejay and sadly I have lost all my equipment and furniture," he said.

Mpumelelo said his younger sister lost her school uniform and books and had missed school for more than a week.

Neighbour Nocawe Mokoena said she has been housing the family since the incident.

"Myself and other neighbours have been supporting the family with shelter, food and we bought them clothes," said Mokoena.

City of Ekurhuleni spokesperson Themba Gadebe said: "We can confirm that we have been to the affected house to begin with investigations and we have assured the family that the investigation will be closed speedily this week."

Gadebe said the investigative report would guide them on what action will be taken.

Teachers and children evacuated as school burns in Cape Town

Teachers and pupils were safely evacuated after the Holy Cross Primary School in central Cape Town caught fire on Thursday.
News
3 years ago

The man suspected of starting a massive wildfire with a signal flare in Betty’s Bay two weeks ago is well known by the police for his previous ...
News
3 years ago
Next Article