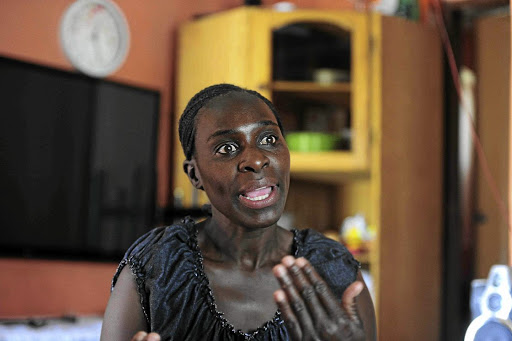 Christine Wiro, who accused former deputy minister of higher education Mduduzi Manana of assaulting her, says she has since moved on with her life.
Image: Thulani Mbele

Christine Wiro, the former domestic worker of ex-deputy minister of higher education and training Mduduzi Manana, says she has since found peace and moved on from the assault that she allegedly suffered at the hands of the ANC man.

It's been exactly a year since Wiro was allegedly assaulted by Manana at his home in Fourways, northern Johannesburg. Wiro told Sowetan yesterday that since losing her job as a domestic worker at Manana's home, she has struggled to find work.

"I just found a piece job now, just last month. I'm working not far from where I live," she said.

Despite the fact that her husband is working, Wiro would have loved to be able to also provide for her family.

"It is not good not to work. If you are used to working for yourself, sometimes you want something and it is nice to be able to buy it yourself," Wiro said.

She said the assaultallegedly by Manana and the attention she received afterwards caused strain in her family. "I am fortunate that my children are supporting me and I can see that I will be fine," she said.

The Commission for Gender Equality has stepped in to help Christine Wiro.
News
3 years ago

Wiro was just three weeks into the job when Manana allegedly pushed her on May 6 last year. He was upset because Wiro had allegedly opened the door for a visitor without checking with him first.

Manana allegedly also threatened to use his influence to deport her back to Zimbabwe. Wiro opened a case of assault and crimen injuria against Manana at Douglasdale police station.

After the case was opened, an audio clip surfaced in which Manana could be heard offering money to Wiro in order to get her to withdraw the charges.

Police investigated the assault charge, but the National Prosecuting Authority said it would not be able to prosecute the case as there were no prospects for success. Prosecutors said a version of an independent eyewitness did not corroborate that of the complainant.

Manana has constantly denied assaulting Wiro and the alleged bribery attempts. He subsequently resigned as a member of parliament in July last year.

Former deputy higher education and training minister Mduduzi Manana’s resignation as a member of parliament was an attempt to “evade accountability”.
News
3 years ago

Bigwig allegedly pushed his helper.
News
3 years ago
Next Article