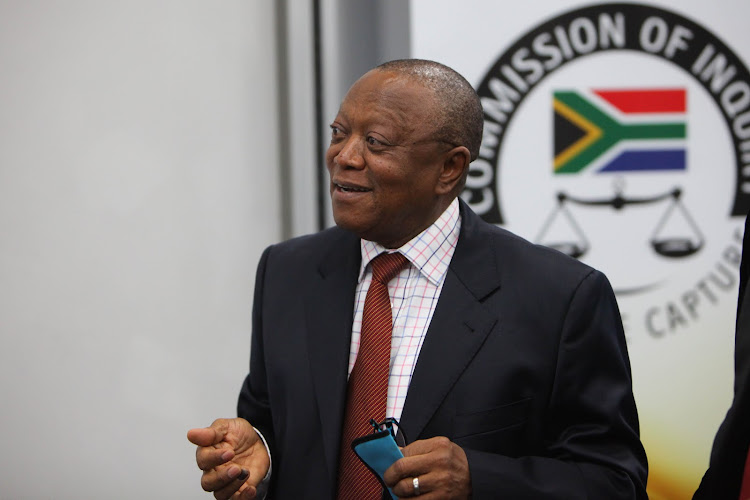 Transnet board chair Popo Molefe at the state capture inquiry in Parktown, Johannesburg on May 7 2019.
Image: Alaister Russell/The Sunday Times

Transnet board chairman Popo Molefe has described the capture of the state-owned company as a "sophisticated operation" put into effect after Brian Molefe was appointed chief executive in 2011.

Popo Molefe, who was testifying at the state capture inquiry on Tuesday, began with a short opening statement which described in brief the dire situation they found at Transnet when he and his board were appointed in May 2018.

He described Brian, at the point when he was appointed at the head of the company in 2011, as "a man who was well-educated, and in many ways, was respected, was trained by the government under some of the ministers who are highly respected".

"But before he [Brian] became the CEO, the strange thing was that a publication owned by a family called the Guptas had already published that he was going to be the CEO of the company," he said.

The nation is eagerly awaiting to see the suspects prosecuted and those convicted facing the full might of the law.
Opinion
2 years ago

"Once they came in there we began to see a process of a collection of individuals with a common purpose that advanced the interests of those who were pursuing quick accumulation of wealth for themselves through certain companies and their linkages to important big business. That began to weaken governance within the company."

He said those accused of state capture at Transnet "took control of the mechanisms" that stood against corruption.

"It was a sophisticated operation. It starts off with people who are known to have served the country, who have the qualification, who have been proclaimed as great managers and corporate leaders. But these people, once they are there, they take control of the mechanisms that provide a countervail against rampant corruption and irregularities in the business," he said.

"We found an individual could sign off a contract for huge amounts of money ... without any reference to the board. It was done through a system of confinement. It is a system that has to be applied very restrictively."

Molefe's testimony will mainly cover what his board discovered when it came into office and the remedial steps it had taken thereafter.

The state capture inquiry will from Monday turn its focus onto embattled state-owned company Transnet when it delves into allegations of procurement ...
News
2 years ago

"When we came into office as the new board, some of the first things we had to consider were the context in which this new board was being appointed - and it was the context that was, among others, characterised by this important development [Cyril Ramaphosa’s appointment as president]," Molefe said.

"His appointment represented the ushering in of a new dawn of SA, it created high expectations among our people. We saw the new dawn as the beginning of the recognition and acknowledgement of the wrongs of the path. There has been a systemic weakening and or destruction of vital organs of the state, state-owned entities, the erosion of talent and skills in all these institutions.

"They had set in untold levels of corruption which had began to define the South African society. Corruption had become an epidemic. The new dawn posed the challenge of reversing this phenomenon of corruption ... This is the context that we saw and therefore for us it meant the beginning of this thorough task of rebuilding."