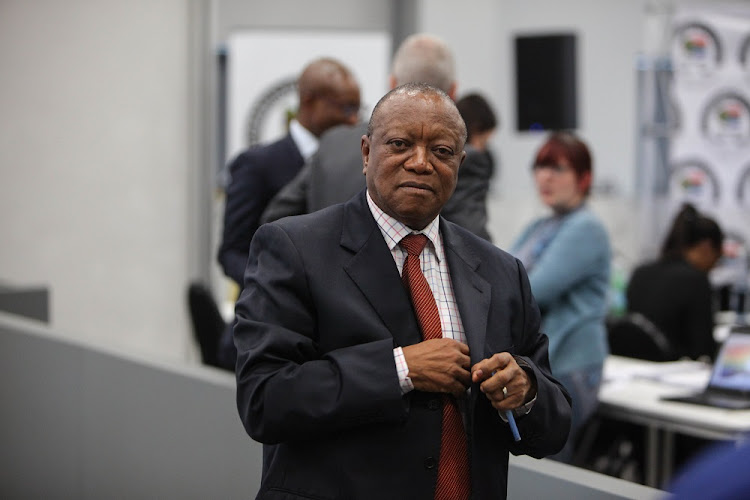 Transnet board chair Popo Molefe during a tea break on May 7 2019 in Parktown, Johannesburg, at the state capture inquiry.
Image: Sunday Times/Alaister Russell

Transnet board chairperson Popo Molefe has outlined a pattern of state capture at the state-owned company which included replacing competent leaders with "cronies" to further an agenda of corruption.

Making an observation about the prevalence of state capture at Transnet, Molefe told the state capture inquiry on Tuesday that the starting point was to make sure the "decision-maker" is captured.

"The starting point is to make sure that you capture the decision-maker, the person in the top position, [then] identify all other strategic positions, which positions will play a critical role in the allocation of budgetary resources in the company, the group CEO, the CFO, the treasurer, chief procurement officer and the key people in operating divisions," he said.

"This is the pattern that we have seen and because these people are people who manifest this professionalism. There has not been a way of looking deeper into their ethical values to see if they are the kind of ethical leaders the company should have."

Transnet board chairman Popo Molefe has described the capture of the state-owned company as a "sophisticated operation" put into effect after Brian ...
News
2 years ago

He said, upon his board's appointment in May last year, that they found collusion among some of the staff.

"There are always little cliques of people who share common understanding of how they want to implement procurement processes to benefit their friends outside ... They collude among themselves, they weaken the governance system and they identify high-value tenders because that's where the monies are," Molefe said.

He said contracts are awarded and, afterwards, the scope of the contract is extended.

"When they extend the scope of the contract they would also then increase capital allocation for that contract. These things are things that we have experienced in Transnet," he said.

"At one level you erode the skills. Those who are committed to the agenda advancing the capture of the SOCs would bring in first their own cronies, and then they seek to turn those who are there who are not their cronies. When there is a resistance from those upon which an attempt is made to turn them to cronies, they are then removed.

"When that moment comes they appoint to those positions people who have no knowledge, qualifications or skills to manage those positions. For those who advance state capture what is important to them is collusion."

Molefe gave an example in which an engineer who had worked for 21 years at Transnet and ran an operating division was replaced by a teacher.

The state capture inquiry will from Monday turn its focus onto embattled state-owned company Transnet when it delves into allegations of procurement ...
News
2 years ago
Next Article