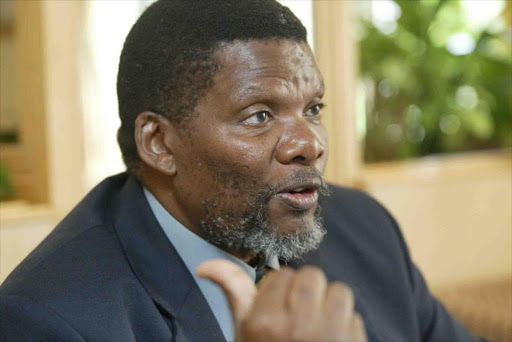 Water and sanitation minister Gugile Nkwinti says he was not given enough time to respond to a damning report, but the public protector's lawyers say his reasons for saying this were flimsy. File photo.
Image: Simon Mathebula

Minister Gugile Nkwinti wants the North Gauteng High Court to rule that public protector Busisiwe Mkhwebane violated the Public Protector Act when she denied him an extension to respond to a report that implicated him in wrongdoing.

Judge Cassim Sardiwalla heard urgent arguments on Monday in the case where the minister sought an interdict to prevent the public protector from releasing her report that found Nkwinti had violated the executive ethics code and the constitution.

But the public protector hit back, saying through her lawyer that she could not bow down to the minister's request for an extension.

Nkwinti's counsel, advocate Ernst van Graan SC, argued that the public protector gave the minister only 18 days to respond to an investigation that took her more than two years to complete.

"The public protector did nothing, absolutely nothing, for two years and two months," he argued.

Public Protector Busisiwe Mkhwebane has made a damning finding against minister Gugile Nkwinti, establishing that he has violated the executive ...
News
2 years ago

Nkwinti's lawyer argued that he had written to the public protector twice asking for an extension to respond to her preliminary report but said she did not reply.

She rejected a request on May 2 to postpone the case to May 10.

Van Graan argued that Mkhwebane did "not have unfettered discretion" in her investigation.

Van Graan told the court that Mkhwebane had ignored requests by the minister to engage with her.

"That is a serious contravention of an obligatory duty that she has in terms of the Public Protector Act," he said.

"They are forgetting that the powers of the public protector are constitutionally sourced," he said.

Shabalala said the reasons for the extension requested by the minister were not good enough as he had first cited "extreme diary pressure in light of the upcoming elections".

"The upcoming elections are a party issue that has nothing to do with the constitution," he said.

He argued that the minister's second reason cited - the many public holidays in April -  was a complete joke.

"It’s a joke. There is complete disregard. He is chilling, this guy … the honourable minister," Shabalala said.

When asked by judge Sardiwalla why Mkhwebane could not give Nkwinti the extension to respond to the case, Shabalala said it would set a bad precedent.

"The minister is playing delaying tactics," he said, further arguing that in the Nkandla judgment chief justice Mogoeng Mogoeng said the office of the public protector could not bow down to anyone in high office.

Sardiwalla stood the matter down for judgment.

SowetanLIVE reported on Sunday that Mkhwebane had made damning findings against Nkwinti, establishing that he had violated the executive ethics code and the constitution.

In a report yet to be officially released by her office, Mkhwebane found that Nkwinti - now water and sanitation minister - had abused his position of authority when he was the minister of land and rural development when he had influenced his department to buy a farm and allocate it to his friend.

The investigation by Mkhwebane's office confirmed a Sunday Times report in 2017 that Nkwinti had introduced a former ANC staff member from Luthuli House, Errol Velile Present, to officials in his department. Eight months later, the department bought a R97m farm in Limpopo and handed it to Present and his business partners.

Present was fired by the ANC in 2018 after he was arrested for alleged involvement in cash-in-transit heists. His trial is still under way.

Mkhwebane found this to be an abuse of position by Nkwinti and that he had unduly influenced his department to purchase the Bekendvlei farm in 2011.

"Minister Nkwinti used his position to improperly benefit Mr Present and thereby exposed himself to a situation involving the risk of a conflict between his responsibilities as a minister responsible for rural development and land reform and his personal relationship with Mr Present," the public protector said in her report.

Mkhwebane said this was a clear violation of the executive ethics code governing the conduct of ministers and the constitution.

"The President [Cyril Ramaphosa] must, within 30 days of publication of this report, take the appropriate action against Minister Nkwinti for violating the executive ethics code and the constitution," she instructed, tersely reminding Ramaphosa that her recommendations were legally binding unless overturned by a court of law.