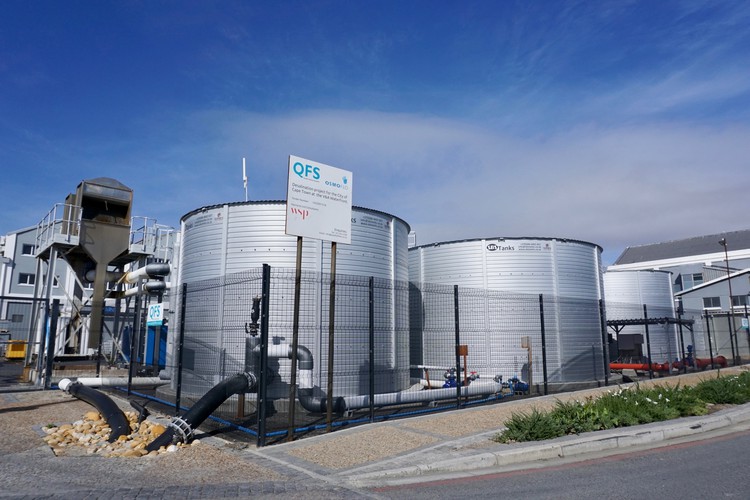 The desalination plant on the Waterfront is not operating and the company that runs it is in a legal dispute with the city of Cape Town.
Image: GroundUp/Kristine Liao

The R60m V&A Waterfront desalination plant has been dormant since February.

Quality Filter Systems (QFS), the plant owner and contractor, said the decision to stop operation was due to concerns about the "legality" of the ocean water being injected into the plant.

According to QFS managing director Herman Smit, the company sent a letter to the city of Cape Town in February asking for confirmation that the feed water is safe for injection, but there has been "no clarity or instruction" from the city in response to its concerns.

QFS had won a tender with the city in January 2018 to provide an emergency desalination plant in the city’s bid to beat Day Zero, the day water would supposedly run out.

The plant began operating in May 2018 and is capable of producing 2-million litres of potable water per day, only 0.3% of Cape Town's daily municipal water usage. The city pays R39 per kilolitre of desalinated water. By comparison it costs about R5 (in 2018) per kilolitre to get dam water to taps.

President Cyril Ramaphosa has flown to KwaZulu-Natal on his return from Egypt to assess flood damage and review the rescue operations underway in the ...
News
2 years ago

But the city has not made a monthly payment to QFS since August 2018, and currently owes the contractor R21.5m, Smit said. The contractor did receive a R2.5m payment from the city on April 18, but it was not attached to an invoice.

QFS is now in the process of suing the city for breach of contract and related damages after a mediation period concluded with no settlement on April 8.

"They screamed for the private sector to come and help them," Smit said. "We took our own money, bought a plant, installed it in record time … and then they turn around and don’t even pay us. What message does this send to investors, to banks, to people in the future?"

According to Mayco member for water and waste Xanthea Limberg, the city has paid its dues up to the end of February. She said the initial invoiced amounts were "not in accordance with the requirements of the contract", and the city was only willing to pay the amounts certified by the city's engineer.

Smit said the disputes began in February last year, one month into the two-year contract. After conducting its own water characterisation report, QFS noticed that its results did not match the city’s feed water specifications provided in the tender.

Smit said the water was "40 times dirtier" than expected. QFS reports showed that, compared to the data in the tender, the ocean water was higher in both salinity (saltiness) and turbidity (murkiness). This discrepancy had forced the company to spend more capital than expected to treat the water and desalinate it.

The dispute over who should be held responsible for feed water testing and additional operational costs remains unresolved after mediation, and will continue to be a topic of contention during the upcoming legal process.

"The city does not want to pay QFS for the additional costs incurred and also penalised QFS for underproduction because of the dirty feed water," Smit said. "In hiding the city’s negligence they expect the contractor to pay for the mistakes in the tender document."

Limberg said, "It was a requirement of the contract that the contractor be responsible for designing their plant, taking cognisance of normal annual variations in water quality parameters over the full delivery period, and to provide a plant robust enough that can accommodate the raw water quality during all seasonal variations."

The city said it was not at liberty to disclose details in the media due to confidentiality provisions in the mediation agreement.

"However, we can say that every effort was made on the city's part to achieve resolution and move forward in a manner that is legally fair to both parties," Limberg wrote. "The mediation concluded without a settlement being reached. The city is currently evaluating its position."