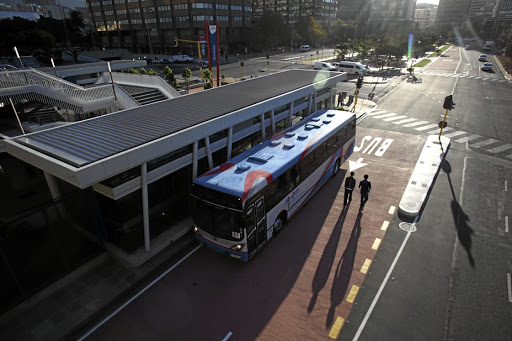 The application to consider bus drivers as part of essential services has been dismissed by the Essential Service Committee. /Shelley Christians

Bus drivers scored a big victory after they were allowed to go on strike as they cannot be classified as an essential service like the police.

This comes after the National Black Consumer Council, a nonprofit organisation, applied to the the Essential Service Committee (ESC) to classify public transport in general as an essential service after last year's crippling strike.

The bus strike began on April 18 and ended on May 14, and affected about one million commuters around the country.

About 17,000 bus drivers participated in the strike after wage negotiations deadlocked.

The council applied to the ESC, a body established in terms of section 70 of the Labour Relations Act, to conduct investigations on services deemed essential and then to designate it accordingly.

The ESC dismissed the application in February, but served the ruling to concerned parties two weeks ago.

In terms of the act, an essential service is "a service the interruption of which endangers the life, personal safety or health of the whole or any part of the population".

The council had argued that the public transport service, in particular the bus service, be declared an essential service as it affected many consumers who were left stranded due to the national bus strike.

The council argued this had added effects on "other consumers in other sectors like hospitals, schools, fire and emergency services, water services etc".

Intercape has suspended one of its bus drivers after a video of him driving recklessly went viral on social media at the weekend.
News
3 years ago

A 39-year-old man was arrested during clashes between police and fired MyCiti drivers at the civic centre in Cape Town on Thursday.
News
3 years ago

Consumers were also hurt financially by having to pay higher travelling costs to get to work using alternative means of transport such as taxis, the council argued.

Other examples of impact, advanced by the council, included that Cape Town commuters had to pay as much as R50 extra daily travelling between Khayelitsha and Claremont, in addition to the monthly bus ticket they had already purchased.

Advocate Luvuyo Bono, the chairperson of the ESC, in his ruling found "the applicants' arguments relied more on the financial impact that the strike action in the bus transport industry had on commuters rather than the endangerment to life, personal safety and health of the commuters".

"The applicant's application hereby fails. On the evidence before us, public transport cannot be designated as an essential service," wrote Bono.

The South African Transport and Allied Workers Union (Satawu), the largest trade union for transport workers, which represented the majority of bus drivers, opposed the application.

Satawu's Zanele Sabela said: "We are happy the ESC is sober-minded and was able to see the frivolous application for what it was."

Sabela said it was an attack by the National Black Consumer Council and "... had it been successful, it would have limited workers' options to exercise their rights".