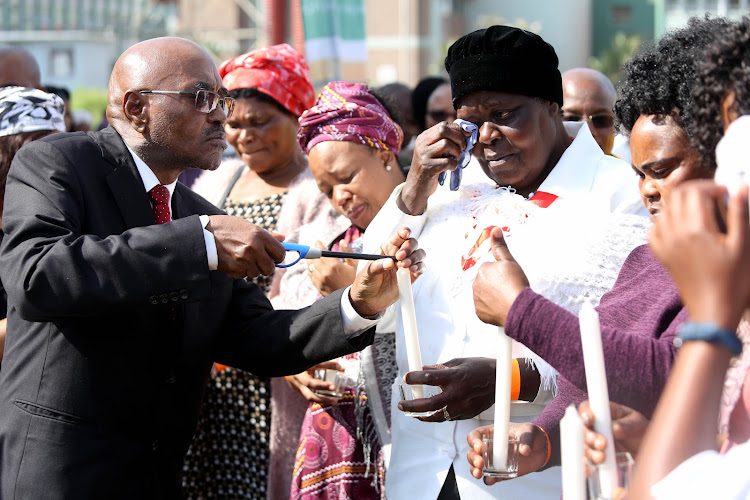 KwaZulu-Natal premier Willies Mchunu lights candles for the families who lost loved ones in the province during the recent floods.
Image: Thuli Dlamini

The devastating floods which claimed 71 lives in KwaZulu-Natal have officially been declared a provincial disaster.

In a letter which SowetanLIVE is in possession of, addressed to departmental head of KZN Cogta Thando Tubane, acting deputy director general of the National Disaster Management Centre Anè Bruwer classified the devastating storm which ravaged KZN as a provincial disaster.

In the letter, Bruwer said that "after having assessed the magnitude and severity of the damage caused by the thunderstorms associated with heavy rainfall/flooding and strong winds" that pelted the eThekwini metro, iLembe, Ugu and King Cetshwayo district municipalities, and in addition to preliminary reports from the KZN disaster management centre, the department had classified the occurrence as a provincial disaster.

The announcement comes as thousands of mourners gathered at Durban's Curries Fountain Stadium on Thursday - declared as a day of mourning and prayer - to pay respects to the 71 people who lost their lives in the floods.

In an emotionally charged ceremony, premier Willies Mchunu lit candles with the families who had lost loved ones during the floods.

Family members of the KZN flood disaster overcome by emotion as candles are lit in honour of the 71 who lost their lives. KZN hosted a prayer and memorial service at Curries Fountain Sports Field in Durban. ⁦@TimesLIVE⁩ #kznfloods pic.twitter.com/NxIl2k3G1T

"We have asked leaders of faith to pray for this province. We need your spiritual guidance during this difficult period. More than 70 people have died and we must pray for the families of the victims. We must ask God to give them strength.

"We recall that in 1987 more than 327 people died during floods in this province. It was religious leaders and all worshippers across all four corners of the province who prayed for the families of the victims," he added.

Among officials present on the day were minister in the presidency Nkosazana Dlamini-Zuma, national minister of Cogta Zweli Mkhize, KZN premier Willies Mchunu and KZN MEC for Cogta Nomusa Dube-Ncube.

The floods occurred over the Easter weekend. The death toll has climbed to 71 as entire communities lost their homes and personal belongings, with thousands being displaced. Dozens of injuries were reported across the coastal areas of the province with the bulk concentrated in and around Durban.