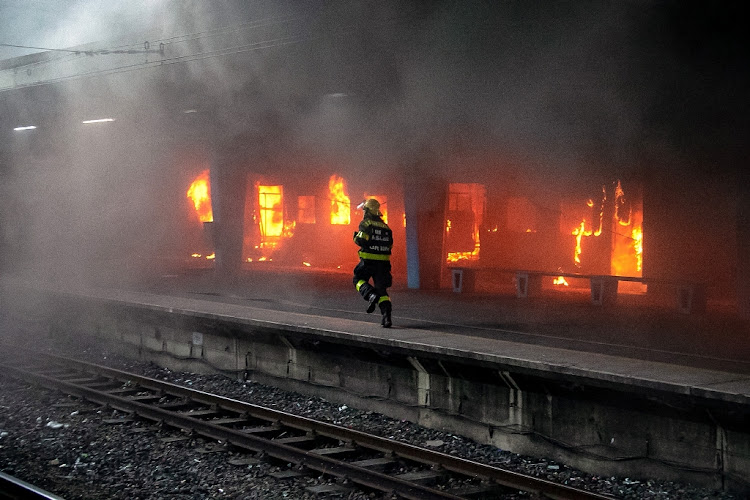 A fireman sprints along a platform at Cape Town's central railway station as a train burns. The alleged arsonists has been referred for psychiatric observation. File photo.
Image: Anthony Molyneaux

The alleged train arsonist who made a confession in court last week appeared quietly in the Cape Town Magistrate's Court on Thursday.

Xoseni, who stood at the dock wearing a large black suit jacket with no shirt, said nothing during the proceedings, in stark comparison to his outbursts a week earlier when he declared: "I burnt the trains."

He will be kept in the hospital wing at Pollsmoor Prison in Tokai until his next court appearance on June 3.

The 30-year-old from Khayelitsha is accused of setting alight two trains at Cape Town station on Easter Sunday, causing damage put at R33m.

Head of security suspended after torching of trains in Cape Town

The embattled Passenger Rail Agency of SA (Prasa) has suspended its head of security and two other security officers in the Western Cape, following ...
News
3 years ago

"I burnt the trains," declared Thobela Xoseni during his first appearance in the Cape Town Magistrate's Court on Wednesday.
News
3 years ago

Two train sets that were burnt to ashes at Cape Town Station on Sunday were worth an estimated R33m‚ according to Metrorail.
News
3 years ago
Next Article