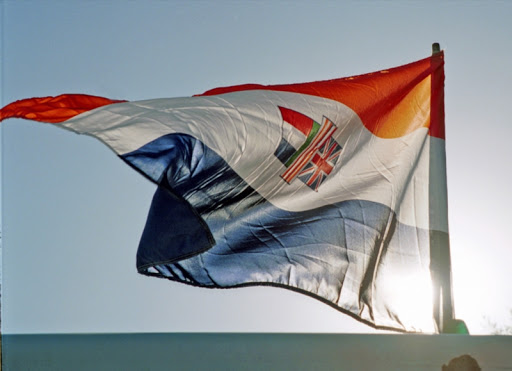 The Nelson Mandela Foundation asked for the display of the apartheid-era flag to be banned, following its use during a Black Monday protest against farm murders in 2017.
Image: Gallo Images/Volksblad/Charle Lombard

The right to freedom of expression is not an untouchable right and is constrained by other constitutional rights‚ which include the right to dignity and to equality.

The Nelson Mandela Foundation made this argument in the Equality Court on Tuesday where it was asking the court to declare that gratuitous displays of the old apartheid-era South African flag constitute hate speech‚ unfair discrimination and harassment based on race.

The Equality Court‚ sitting at the South Gauteng High Court‚ has reserved judgment.

AfriForum opposed the application‚ saying the ban would be an infringement of the right to freedom of expression.

AfriForum's counsel Mark Oppenheimer told the court on Tuesday that the organisation's case was that all displays - whether offensive or not - were protected by the freedom of expression provision in the constitution.

The Federasie van Afrikaanse Kultuurvereniginge (FAK)‚ which was admitted as friend of the court‚ argued that the application should be dismissed.

Iain Currie‚ counsel for FAK‚ said the case was about political expression and it entailed asking the court to declare what could and could not be said.

"That is precisely what the freedom of expression guarantee is intended to prevent‚" Currie said.

People who gratuitously display the old apartheid-era flag yearned for an apartheid South Africa where white superiority was institutionally ...
News
3 years ago

Currie said the previous regime‚ like all other authoritarian regimes‚ kept itself in power by exercising thought control over its citizens in establishing and policing what could be said and what could not be said.

Currie said the freedom of expression guarantee in the country’s 1996 constitution set out to prevent this.

However‚ counsel for the foundation Tembeka Ngcukaitobi said freedom of speech was itself constitutionally constrained.

Ngcukaitobi said it was important to regulate speech that would assault people’s dignity and equality.

Ngcukaitobi said the foundation did not come to court to ask AfriForum and its supporters to stop racism and to stop their own racism.

"We have not even come to ask that they should stop grooming their children to become racists and white supremacists. If they want to‚ that is their choice.

Ngcukaitobi said Oppenheimer‚ for AfriForum‚ was arguing that in the world of democracy‚ opinions - even those that were offensive views - must be expressed.

"What he does not appreciate is that dehumanising speech is not about opinion. It is about the denial of humanity.

As the Equality Court hears arguments to declare gratuitous displays of the old South African flag as constituting hate speech, a 75-year-old man ...
News
3 years ago

The old South African flag was a vivid symbol of white supremacy and black disenfranchisement and it also gave expression only to European heritage ...
News
3 years ago
Next Article