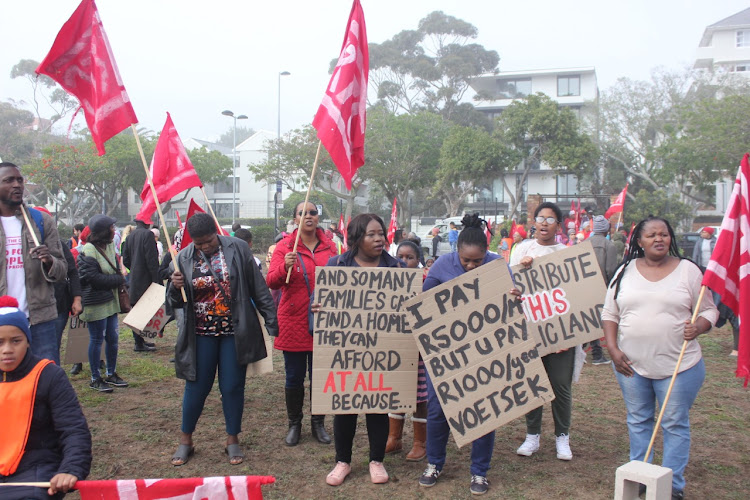 Reclaim the City activists on Wednesday staged a protest at the Green Point Bowling Green in Cape Town in a demand for the property to be used for affordable housing.

"We are digging the foundations and laying the bricks for new homes for the workers who keep the city in business," Reclaim the City said.

"Like in other cities throughout the world, it is the working class that has been forced to live in the outskirts and in inhumane conditions. It is through our labour that the City of Cape Town was built, and yet there is still no place for us," the group said in a statement.

In the report, City Leases: Cape Town's Failure to Redistribute Land, released in March this year,  it proposed a "radical new deal" for housing on 24 areas of the city-owned land. This included bowling greens, golf courses, country clubs and parking lots.

Reclaim the City had also staged a protest at the upscale Rondebosch Golf Course a month ago.

How portrayal of protest in South Africa denigrates poor people

Poor people in South Africa often feel that the only way they can be heard is to protest. The past few days have shown that not even this gets them a ...
News
2 years ago

According to the authors of the report - Nick Budlender, Julian Sendin and Jared Rossouw - there were no constraints to developing on Green Point Bowling Green.

"It is flat, large, well-located, and clearly underused, they said. A site of this size and in this location has good potential for cross-subsidisation."

The report further stated that the bowling green was situated on MyCiti and taxi routes, close to jobs, schools and public amenities.

Deputy mayor Ian Neilson had previously publicly announced that this land would be redeveloped for social housing.

Reclaim the City said they held Neilson accountable for his "commitments made a year ago".

"He must do what he promised. Our constitution says that the state must use land, including its land for redress, transformation and addressing inequality.

"The city has failed to use its land to address this housing crisis. Promises have been made on several parcels of land in this city, and yet, not one brick as been laid. Promises do not make homes."