'It's empty, there's no food,' voter tells Ace Magashule, pointing at her fridge 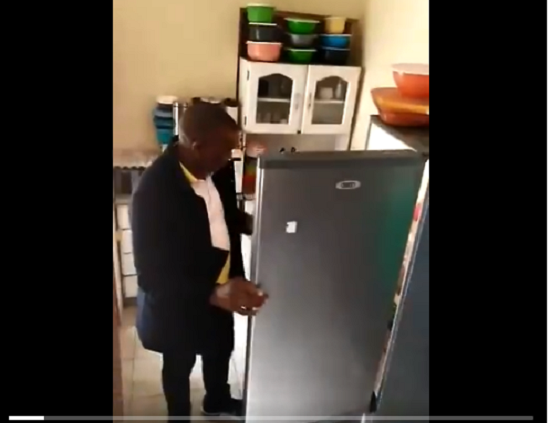 Two weeks ago ANC Secretary General peered into an empty fridge before handing the owner R400 for groceries.
Image: Twitter

It seems that more and more struggling potential ANC supporters expect the party's controversial secretary-general, Ace Magashule, to hand them money when he enters their homes.

This became apparent when Magashule embarked on his door-to-door election campaign trail in the informal settlement of Inkanini in the township of Makhaza outside Cape Town on Tuesday.

While asking for Inkanini resident Mathapelo Senako to vote for the ANC, the unemployed mother told Magashule that she too was struggling and he was free to open her empty fridge to see for himself.

"I am unemployed and I'm struggling. Don't be deceived by my decent-looking shack. You can go open there," said Senako, pointing to the fridge.

Ace giving R400 to woman voter was only ubuntu - ANC

The ANC is not aware of any investigation into the actions of its secretary-general Ace Magashule.
News
3 years ago

"You will see that it's empty, there's no food because I'm unemployed. I've [heard] stories about you donating something to other people."

Magashule caused a stir on the campaign trail at Philippi on the Cape Flats a fortnight ago when he handed over R400 in cash to a potential voter after noticing her empty fridge.

Magashule was accused afterwards of vote buying and the matter is now the subject of an investigation by the Electoral Commission after it received complaints.

"She's unemployed, she's hungry. Her fridge is empty. She's not been working for some years but you guys [the media] when people say they are hungry and we contribute, you say we are buying votes.

"So she says we must not worry about such things. She says she will vote ANC because she believes in President Cyril Ramaphosa," said Magashule.

Turning to a more current issue, Magashule told journalists, in response to questions, that he had filed a complaint with the inspector-general of intelligence over suspicions that his phone had been illegally bugged.

ANC secretary-general Ace Magashule has claimed that his phone and that of his deputy‚ Jessie Duarte‚ are being bugged by "state organs".
News
3 years ago

Magashule made the startling claims at the weekend but he was criticised for airing them in public before complaining to the relevant authorities.

"I've laid a complaint with the [inspector-general] and I think let's leave it there," he said, refusing to explain exactly when he had lodged the complaint.

"I didn't talk to the ministers, I have talked to the IGI. It's a matter between me and the IGI and maybe let's focus on the elections."

Magashule also declined to indicate when he would be acting on his threat to take legal action against journalist and Gangster State author Pieter-Louis Myburgh for his book which implicates the former Free State premier in serious allegations of corruption.

Magashule refused to respond to criticism levelled against him by former president Thabo Mbeki, who said the ANC leadership could not ignore the corruption allegations against its chief administrator.