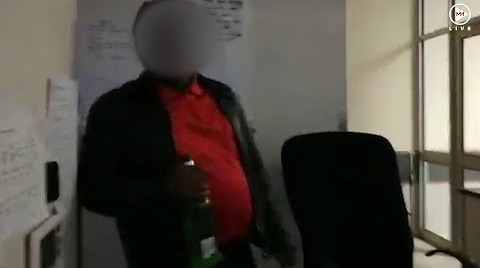 The incident, caught on video, shows a drunk man carrying what looks like a beer quart at Port Elizabeth's Livingstone hospital.
Image: Supplied

An admissions clerk who appeared drunk in a video taken at Port Elizabeth's Livingstone hospital has been placed on precautionary suspension pending an investigation.

Public service and administration minister Ayanda Dlodlo’s spokesperson Mava Scott told HeraldLIVE that the employee would be issued with disciplinary charges on Tuesday.

The video that went viral last week shows the man on duty behind the admissions desk at Livingstone hospital’s emergency unit. In the video he can barely speak, slurring his words while holding onto a wall.

The video shows how a woman tries to get him to open a file for a patient who was being treated in the “physician on call” section of the emergency room. Instead of opening a file the man offers to “go check on the patient”. “Why?” the woman is heard asking. “Are you a doctor?” “No I am not a doctor,” the man can be heard slurring.

“The employee is not allowed within the hospital premises unless he has been authorised by the employer but has to be available anytime when needed for the investigation,” he said.

Treatment Action Campaign Eastern Cape deputy chair Thembisile Nogampula said the organisation was liaising directly with health MEC Helen Sauls-August on this matter and she had assured them that the case would be dealt with.

“It is very disturbing to watch the video. An official like that hampers the human right to health,” Nogampula said. “He should be dismissed with immediate effect.”