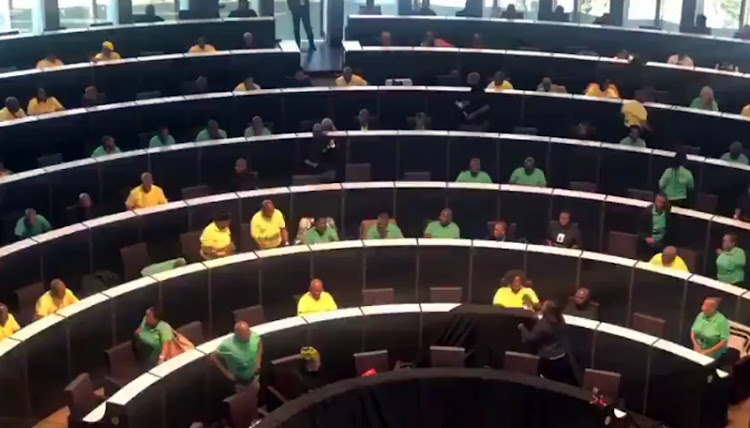 Two councillors' were removed from chambers and referred to the ethics committee following their attempts to derail the state of the city address.

Security had to be called in to remove the councillors who were calling for the speaker to count the number of councillors in the chamber to check if they reach a quorum.

"We are not going to be undermined nor are we going to be abused by this house. We want a count, that's all," said Councillor Lloyd Phillips of Patriotic Alliance before being removed.

The two councillors said that by virtue of ANC councillors leaving the chambers, the house did not meet the quorum which meant the address could not continue.

They were told that the address did not require a quorum, to which Councillor Phillips said: "Then the mayor could have just invited the DA since he turned it into a campaign. Why is he inviting us? If he doesn't need a quorum, why is he inviting us? I think you just need to check on the rules again and try to assist us in an appropriate way".

MMC for public safety Michael Sun, who is also a DA councillor, said that the two councillors would be referred to the ethics committee.

"I want to request the house, through yourselves, that the two councillors that are misbehaving are formally be referred to the ethics committee," he said.​

ANC Joburg regional chairperson Geoff Makhubu said they walked out because Mashaba turned the state of the city address into a DA rally.

"What we did not come to do was to listen to a rally of the Democratic Alliance. You could hear us shouting and heckling saying please speak the truth and stop insulting the ANC," Makhubu.

ANC cllrs have left the Council Chamber, refusing to listen to the Mayor's continued spin and misinformation on the #RealStateOfTheCity. The ANC is clear; there was #NoSOCA in Joburg today, but a speech by the Mayor trying to deceive residents. pic.twitter.com/8DWLf9XzHS

The final straw for ANC caucus, according to Makhubu was when Mashaba said spoke about how immigration problems can only be solved by a change of government in the Union Buildings.

"What type of mayor of a city advocates for a change of a national government in the state of the city [address]? Now we felt that, look, we can't sit in a DA rally, he's really electioneering [and] we've allowed him to electioneer to say this is my achievements, I brought this I brought that, however, the first thing is that he brings in toxicity into the council and we don't want to be part of that toxic state of the city," said Makhubu.

Johannesburg's state of the city address was delivered by the city's mayor, Herman Mashaba, on April 30 2019. The address touched on major issues affecting the Johannesburg area.