Tshwane brings back free Wi-Fi in the townships 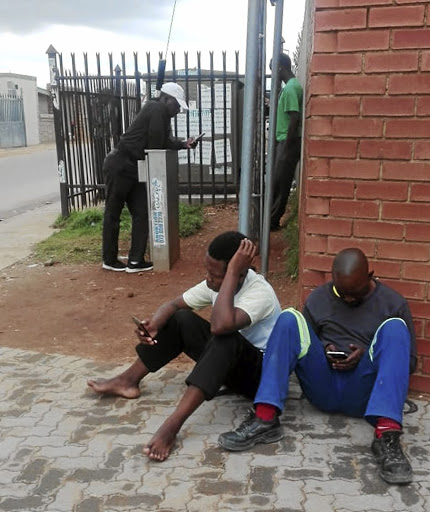 Residents of Olivenhoutbosch use free Wi-Fi, which the city of Tshwane has made available at several zones.
Image: ISAAC MAHLANGU

The area near Steve Tshwete Secondary School in Olivenhoutbosch in Centurion has become a sort of a meeting place, thanks to the free Wi-Fi provided by the municipality.

Dozens of youth gather around the entrances of the school with their eyes glued to their cellphone and tablet screens as they enjoy free Wi-Fi provided by the city of Tshwane.

Some come with their laptops to work on school assignments, while others catch up on what's happening on social media.

When Sowetan visited the area yesterday, there was more than a dozen youngsters glued to their mobile devices checking e-mails, while others were searching for jobs online.

The Wi-Fi hotspots by the city of Tshwane have been increased and reconnected in the township, south west of the capital from last month.

Radebe said he's able to apply for jobs every day but is frustrated by how slow the service gets, especially in the afternoons when there are a lot of people using the free Wi-Fi service.

"I use the free Wi-Fi service mainly from around 10am because I apply for jobs online, that's the only reason I am using this service," Radebe said.

He said although he is yet to be called for any interviews, he is hopeful he will get something soon.

"I haven't been working since January but I have experience as a fibre optic installation technician, so I get worried when the Wi-Fi is slow because it assists me as I'm here because I am looking for a job," he said.

Molebogeng Kgafane, 20, uses the free Wi-Fi every day to check e-mails and catch up with friends on social media mainly Facebook.

"There's always around 80 to 100 people here late in the afternoon, then this Wi-Fi gets very slow, people come with laptops to do their assignments here," Kgafane said.

He said he also uses the free internet service to look for jobs in the retail sector.

"It's a valuable service as it's just a five-minute walk from home, but I wish they could increase its capacity so that it's not as slow."

Kgafane said the municipality should also consider erecting shelters and a sitting place around the free Wi-Fi zones because those doing assignments have to work for hours with laptops in the sun.

According to the city of Tshwane, the free public Wi-Fi now has 1,086 zones, including those in townships such as Olivenhoutbosch.

The city plans to increase the number of Wi-Fi zones throughout Tshwane, which currently has more than 1,8-million unique devices that have accessed the network, making it one of the largest Wi-Fi network in Africa.