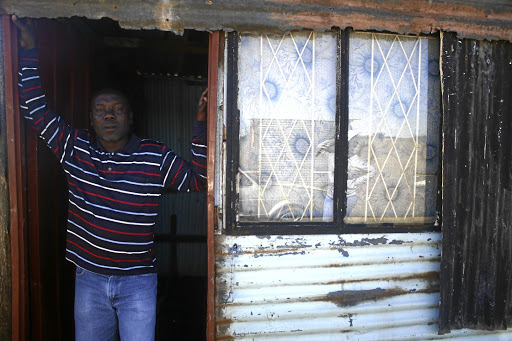 Bongani Malinga says he has been saving on rent money after he moved into Ironside, a vacant piece of land near Vereeniging, three months ago. / Kabelo Mokoena

Land grabbers in the Vaal say they would rather die than give up the illegally erected structures they call home.

Emfuleni municipality has been battling to remove people who occupy land illegally.

Last Tuesday, the Red Ants went to Ironside near Vereeniging to remove the squatters, but residents blocked the entry to the area.

Bafana Mashinini, 34, lives in a well-maintained yellow shack in Ironside. It is furnished, has a cement floor, burglar bars and a washing line outside.

Desperate for a place to live, Mashinini and dozens more people illegally grabbed the land and erected shacks.

Mashinini said he lived with his grandmother in Orange Farm before he moved to the area about two months ago. He said he would rather die than leave his home.

He said his grandmother's four-roomed house was too small for him and his relatives.

"I came here because I wanted privacy. I lived there with my son, my pregnant sister and her child," he said.

Mashinini said he will not surrender the land. "We are not going to roll over and play dead. This place has been vacant for over 40 years. Now that we are using it, it is a problem," he said.

Shacks have sprung up on a privately owned land near Soshanguve, north of Pretoria, causing the owners distress and financial headaches.
News
3 years ago

Plots have been marked off with duct tape and rope on a vacant piece of land in Parkwood‚ Cape Town.
News
3 years ago

Bongani Malinga, 50, moved to the area three months ago. He said he had been renting a garage with his wife and four children.

"I can't afford to rent and look after my family because I am unemployed," he said.

On April 10, two people died when the Red Ants tried to remove illegal dwellers in Rustervaal, Vereeniging. A resident and a Red Ants employee died during the clashes between the two groups.

Dozens of people continue to live there and refuse to leave.

Khaya Mhleni, 35, arrived in the area in March. He said he was tired of renting.

"I erected my shack in someone's yard and paid R300 a month. I work odd jobs. Sometimes I did not have money to pay rent," he said.

Akhona Radebe, 37, from Soweto said she could no longer afford rent.

"I am unemployed and my husband works odd jobs. We paid R250 for a shack but it was a lot because sometimes he does not get work. We still have to eat and buy clothes. We will rather suffer here. We don't have plans to leave this place," she said.

Emfuleni mayor Gift Moerane said the municipality will put infrastructure on land and allocate it to people who are registered for housing.

"We discourage people to grab and invade land. People should wait for government to furnish the land first and release it according to the number of people on the waiting list for housing," he said.

Moerane condemned the violence that occurred during evictions.