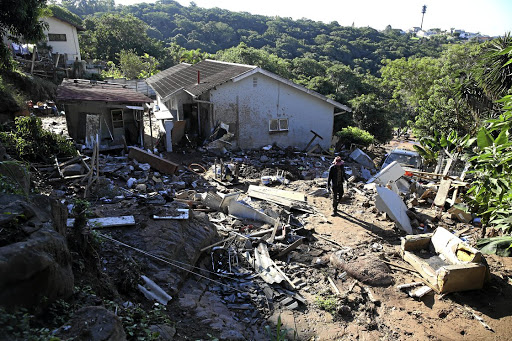 Seven people died when a house collapsed in Queensburgh during the floods
Image: Thuli Dlamini

The death toll from the devastating floods which swept through parts of KwaZulu-Natal last week has been confirmed at 70, with an estimated R1.1bn in damage.

Addressing the media in Durban on Monday, KZN premier Willies Mchunu said this number could further increase as two people were still missing. He said more than 50 people had been admitted to hospital.

"The death toll at this point has increased to 70, as yesterday the body of a young male was recovered in eTshelimnyama near Mariannhill. Sixty-four of those who died are from the eThekwini metro and six are from the Ugu district."

He said 1,469 people had been displaced by the floods and had to be provided with temporary accommodation in community halls and by their neighbours and relatives.

"While we don't have a timeframe for re-accomodating those affected by the floods, we have asked the human settlements department to make it a priority."

Mchunu said that at least 235 private homes were damaged in eThekwini alone.

"This disaster caused massive damage to infrastructure, both public and private. Railways, roads, houses full of furniture and personal possessions were damaged or destroyed.

"The estimated damage stands at R1.1bn with eThekwini estimated at more than R685m. Many families have been rendered homeless. In addition to displacement, many people's lives were interrupted by power outages, the majority of which have been attended to," he said.

Accompanied by Cogta MEC Nomusa Dube-Ncube and eThekwini mayor Zandile Gumede, Mchunu said a Provincial Day of Prayer is set to be held in honour those that died.

"As a mark of respect to honour our fallen compatriots, the Provincial Executive Council has resolved to declare Thursday, May 2 2019, as the Provincial Day of Prayer and Mourning to show solidarity with the bereaved families and to pray for those who have passed away as well as for an end to these tragedies in our province."

He called on all citizens, inter-faith formations and all sectors of society to participate. The main event will take place at Curries Fountain Sports Field, in Durban, from 9am.

Final figures are expected to be released during the day.
News
3 years ago

A mother whose daughter drowned said she was with her nine year old brother.
News
3 years ago
Next Article