A way out of drug addiction 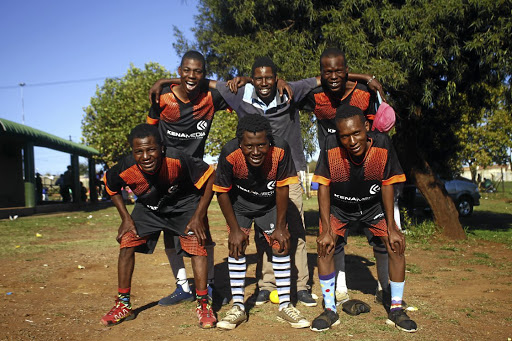 A nyaope tournament was held at Naledi sports centre in Soweto. Players put their addiction aside to compete. / KABELO MOKOENA

For Tshepo Seema, overcoming the addiction to drugs was a decision he needed to make to save his life.

Seema was one of dozens of substance abusers and recovering addicts who converged on Naledi to take part in a soccer tournament hosted by Great Poroza organisation on Saturday.

The organisation aims to help users overcome their addiction while also integrating them back into society.

"I had a good life. I studied information technology and had a good job that paid well," Seema said on Saturday.

But the 32-year-old fell into the clutches of nyaope abuse that destroyed his life. "I had a lot of problems that I was dealing with but did not want anyone to know about. I bottled things up and found solace in using substances until I was kicked out of my home by my family because I stole anything of value to feed my habit," Seema said.

Barely hours after opening for business, a new shop selling cookies and oils containing cannabis was raided by police at Sedgefield on the Garden ...
News
2 years ago

After 12-years of addiction, the father of one decided to clean up his act and booked himself into a rehabilitation facility. "These things [drugs] destroy your life. You find yourself obsessing about getting your next fix. Nothing else in the world matters except your next hit. I've been clean for six months and it's been okay. I just hope that my family can accept me and support me through this journey," he said.

Obakeng Thubela struggled with mandrax addiction. However, he has been clean for two years.

Thubela said his journey saw him being sentenced to four years in jail after he was found guilty of house robbery.

"I provided my friends with information about a house in my area where I knew would be easy to break into. They stole whatever they could get their hands on and they were later caught. They told the police that I was the brains behind the crime," Thubela said.

The police anti-gang unit in the Western Cape says it is continuing to make inroads in its war against illegal firearms and drugs.
News
2 years ago

The 25-year-old became addicted to drugs through peer pressure and experimenting with substances as a student.

"I hung out with the wrong crowd, it's my dependency on drugs that saw me being involved in crime. I needed to feed my habit and that was the was the easiest way," he said.

He now spends his time helping others overcome their addictions.

One of the organisers of the soccer tournament, Goitsemang Sesinye, said their aim was to reconnect substance abusers with their communities. "We are not only hosting a tournament, this is something we do three times a year. We are not working alone, but we have social workers and rehabilitation centres that we have partnered with so that this is not just a day's event but that this adds something meaningful to their lives," he said.