Cows euthanised after gruesome crash on M1 highway in Joburg 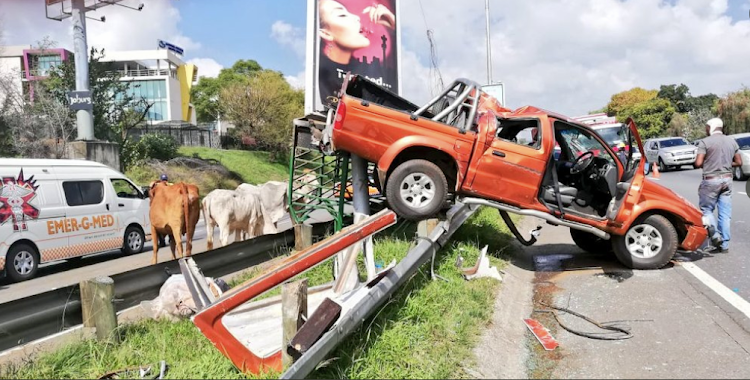 One person was injured after a trailer carrying cows overturned on the M1 highway in Johannesburg on Sunday, April 28 2019. Two cows had to be euthanised.
Image: Twitter/David Tembe

A gruesome scene unfolded between Grayston Drive and Corlett Drive on the M1 in Johannesburg when a trailer carrying six cows overturned on Sunday.

One person was injured and two of the injured animals had to be put down.

Johannesburg Metro Police Department (JMPD) spokesperson Wayne Minnaar said that six cows were being transported in the trailer. "The trailer overturned,” he said.

He said four of the cows were recovered while two were later found injured and had to be put down by the Society for the Prevention of Cruelty to Animals (SPCA).

Minnaar said a man who was driving a double-cab bakkie was injured after his vehicle landed on the centre barricade during the incident.

Chickens criss-crossing the N1 - and it's no joke, with injuries and chaos

Chickens are running around on the N1 near Midrand after the truck they were being transported on crashed on Thursday, Arrive Alive said.
News
3 years ago
Next Article